Ride to Chuckwagon Cook-off in Clarendon TX-East on I-40 to Amarillo, then south on US 287 to Clarendon-reverse back to Albuquerque 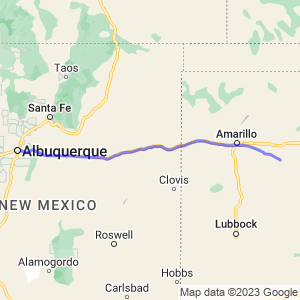 Back in April I took a ride to Logan for a Chuckwagon Cook-off, that event was so much fun I went home and looked for another cook-off to attend.

There were several different places to pick from, but I wanted the cook-off to be in a small town and not connected to another event. The 18th annual Charles Goodnight Chuckwagon Cookoff was in Clarendon a west Texas town with a strong ranching tradition.

We started the ride late Friday morning, giving me a chance to spend a couple hours at work before leaving town. After filling up in Santa Rosa we stopped and explored Cuervo. Cuervo is about 20 miles east of Santa Rosa just off the Interstate.

After looking around a couple of the abandoned buildings and old church we got back on the Interstate. In Amarillo we had a very late lunch at the Big Texan Steakhouse.

The Big Texan offers you a free meal if you can eat a 72 Oz steak and all the fix’ins in an hour or less.

We didn’t try for the free meal and enjoyed a less ambitious lunch.

We arrived in Clarendon and had some trouble finding the museum, its location in both the GPS and Google Maps was incorrect. After getting our camp set up we spend some time walking around the Chuckwagons.

It was around this time that I got notice of a problem at work. It was an issue that required my    immediate attention. While Chuck mingled around the wagon I tried to fix my problem.

After the sun went down, each wagon did something different. One wagon broke out the bourbon and beer, starting a party that lasted late into the night. Another wagon had several guys playing their guitars and singing around a small fire. The wagon we joined had everyone  sitting around a bucket while they peeled potatoes and told stories.

At 3:30 I woke up to the sound of chopping wood, coming from one of the wagons. For the next few hours I sat in my tent pounding away at my Netbook trying to solve my problem at work.

When Chuck got up we broke camp and packed the bikes. Then we rode over to the VFW for breakfast. One of the locals told Chuck that the VFW had the best breakfast in town.

My breakfast was good, but Chuck told me his omelet was the best he had ever eaten.

We explored around Clarendon for a couple of hours before heading back to the museum for our chuckwagon lunch.

The lunch was as good as it looked. All the time, effort and love of the craft these cowboy cooks put into the food made it better than a five star restaurant. The people running and participating in the cookoff were open and friendly. They treated us like part of the family and I had a great time. After lunch we rode back to Albuquerque and I went straight into work, getting done at 2:30. It was a very long day, but one I’d gladly do again.