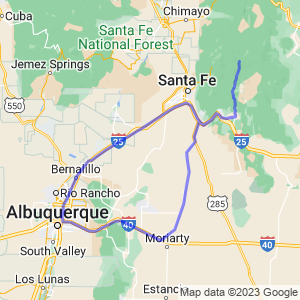 It’s Saturday and I’ve got half a day open, it’s not hard to guess what I’m going to do.

My wife said she would join me if I kept the ride times less than 5 hours, so I planned out a 4 1/2 hour ride. The mountains had some cool weather, so I thought I ride out and see if any of the leaves were starting to turn.

It was a perfect day for ride, cool and clear with light traffic. We headed east on the Interstate to Moriarty to catch NM 41 north, normally I use NM 472 to cut across, but today I used the Interstate to cut some time from the ride.

The Pecos area was cool, but not cold and we both enjoyed the twist’s along the river. On the way back we were going to eat at Bobcat’s Bites. But when we got there, the place was packed with a long waiting list. Instead of waiting we got on the bike and took the Interstate back to Albuquerque.  We still liked the idea of a good burger for lunch, so we made our way to PapaBurger’s just off 4th street in Albuquerque.

On the way back to Albuquerque I got my first speeding ticket while driving a motorcycle. I’ve had a couple of warning, but this was my first ticket. I’ve never had a radar detector and my bike seems to cruise nicely at 3500 RPM (70-80), so it was only a matter of time. Here’s hopping I go another 100,000 miles before I get another one.

The burger and onion rings at PapaBurger’s were both very good. There is only one problem with this place, coming here for lunch doesn’t give me much of a ride.  Take the ticket away and it was a perfect ride, weather, scenery, company and food all very enjoyable.