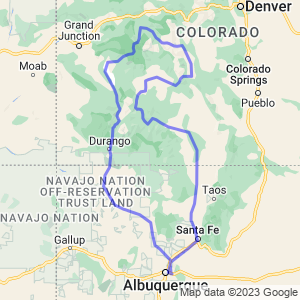 At the beginning of the year I promised my daughter a summer ride through the mountains of Colorado. She was going back to school on August 13, making this the last weekend I could take her and not have her miss a day of school.

Taking a ride of under 1000 miles over three day seems like it would give you lots of free time, but this 1000 mile route provided us with lots of time on the bike (about 7 hours per day). We started our first day around 6:00 and rode to Alamosa for breakfast.

The Campus Cafe in Alamosa is one of my favorite places to eat breakfast, the only problem, it’s 3 1/2 hours from my house. Anytime I’m going north I try and figure out a way to eat at the Campus Cafe.

When our waitress sat our breakfast down on our table we both started eating, the food was first-class and it quickly disappeared. Their bread is homemade and thickly sliced, this morning we tried their french toast. This was all that was left by the time I remembered to take a picture.

Next we made our way into the mountains and the mining town of Creede. Here we enjoyed our last bit of dry weather.

Over the next 20 miles we rode through a mountain downpour complete with hail. At the falls it slowed down to a light drizzle, allowing us to break for pictures.

As we were walking back to the bike, a guy climbed out of his truck and started to rib me about riding in the rain. Knowing he would never understand, I just looked him in the eye and told him it’s what I prefer. He shook his head like I was crazy and I wished him a good-day as we pulled away.

In Lake City we stopped and got some ice cream. We even got to walk around for about 30 minutes before the rain caught back up with us.

It rained on us all the way into Gunnison and as we set up our camp at the KOA. After getting the tent set up, we walked over and played some pinball before going to dinner.

We split a small pizza at Marrio’s in Gunnison. Marrio’s had lots of great reviews, while I didn’t find it outstanding, we did have a good meal.

We woke up at 6:00 and waited about 30 minutes for it to stop raining, then we packed up and hit the road.

In Monte Vista they were having an event called “Gold Rush Days”, so we stopped and walked around. Allie got to pan for gold and we bought some pickles for my wife.

We left “Gold Rush Days” and started to make our way over Independence pass, but first we had get past Twin lakes and a big bicycle race, that had everybody stopped.

When we got to Aspen, they had the streets closed down for some festival and after going down a couple alleys I ended up taking the bike into a place it shouldn’t have been. We were a one bike parade passing through part of the event.

In Carbondale we stopped for lunch at the Village Smithy, it was highly recommended and very busy. We both ordered lunch and I think that was a mistake, because the breakfast food looked much better on the other dinner’s tables.

The fries were the best part of the meal and to be truthful I felt a little let down. Maybe the anticipation of greatness got me expecting more, the food was OK.

We motored our way south on CO 133, 50 miles thought the mountains with no towns, then you hit the farming country on the other side and people. We got rain again just before we got to Ouray and our next camp.

At the KOA there was a BBQ and dance, so after cleaning up we headed over for some dinner.

The place was packed, so we shared our table with a couple from Denver. We swapped stories and enjoyed our meal–good company, food and music, what more could you ask for.

The next morning we got up and packed our gear wet for an early start. Went to see the falls in Ouray but they don’t open till 8:00, we walked along the canon near the road but never saw the falls.

It was a nice ride over the pass into Silverton, there were no other vehicles and I rubbernecked all the way.

As we were nearing Durango a train fill with tourist bound for Silverton passed us parallel to the road. As I gave them my best wave the engineer blew his whistle and all the people on the train started cheering and waving back. It was one of those moments that really makes you feel alive.

In Bloomfield we stopped at Sonyas for breakfast, this is my kind of place. All morning I kept thinking about how good breakfast was going to be at Sonyas and then it was. Now, all that’s left of our ride is 2 1/2 hours in the hot sun on US 550.

The ride and the weekend were both over. We got to spend 3 days and two nights connected without barrier to some of the most extraordinarily beautiful country in the world.