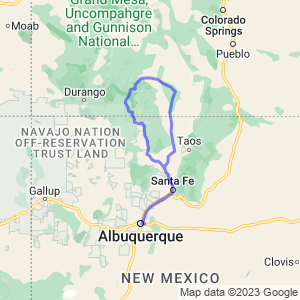 South Fork has their Logger Days the third weekend of July every year, this year my Daughter and I were thinking of camping up near South Fork and making a weekend of it. However, in Albuquerque they were also holding the Nob Hill Crawl another event we wanted to attend. So we decided to do both and rode up to South Fork to spend a couple of hours at Logger Days. Then we rode back to Albuquerque in time to enjoy the Nob Hill Crawl with my wife and older daughter.

We started our ride at 6:00 and after leaving Espanola the rising sun was at our backs. It really highlighted the canyons and mesas around Ghost Ranch.

We covered about 160 miles before stopping for breakfast in Chama at Fina’s Diner.

Fina’s Diner is a small locally owned restaurant with just a few tables. The place was pleasant and the food good.

After breakfast we made our way to US 160 and over Wolf Creek Pass. This 40 mile section of highway makes this ride worth taking.

After Wolf Creek, we dropped down into the Rio Grande valley and the town of South Fork.

They had music, crafts, food and logging events.

After a couple of hours we left and made our way to Alamosa. In Alamosa we stopped at one of my favorite places, the Campus Cafe.

At the Campus Cafe we split a Cinnamon roll. Their Cinnamon roll are size of a small child’s head and are floating in butter. We didn’t come close to eating it all.

After leaving the Campus Cafe we got on US 285 and headed for Albuquerque, we didn’t stop for any more pictures. We did get rain and some brief hail (just long enough to give us a few welts).

Back in Albuquerque we changed cloths and made our way to the Nob Hill Stroll. They blocked Central for a mile and set up bands, booths and old cars to walk through.

This was a great way to spend the day, a 500 mile ride ending in a one mile long block party.

If I can find time this summer I’ll do this loop again, only going the other direction. It’s a long ride and only about 120 mile of Interstate, something I can remove completely if I want. It was a fun day and I had no trouble falling asleep that night.