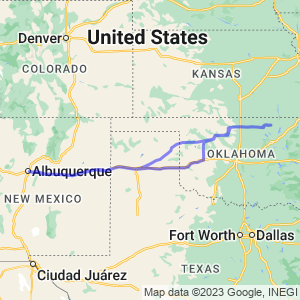 My wife’s summer was coming to an end and she wanted to see her parents before going back to work, but she also wanted to spent some time on the bike. To make both things happen we made a quick trip to Bartlesville Ok.

Thursday we were up and on the road as the sun was starting to rise. We made a quick stop for a cheap breakfast at the McDonalds in Tucumcari.

We exited the Interstate and made a short detour into Vega Texas to look at their silo. Every time I pass this landmark it reminds me of a blizzard that trapped my family in Vega, back in the 60’s. That trip was both scary and fun as any good adventure should be, it was something I’ll never forget.

Next we passed the largest free standing Cross in America just out side of Groom TX. Then it was on to Clinton. By the time we rode into town the heat was well over 100. We checked into our hotel and changed cloths before looking for a place to eat.

Using the “Local” app on my phone we reviewed several restaurants and ended up picking “Wong’s”. It was 3:00 and we had the place mostly to our-self’s.  The waitress saw we were from New Mexico and told us how much she loved Santa Fe.

The reviews in Google didn’t lie, the food and service were outstanding. The portions were so big we took the leftovers back to the hotel and ate them later for dinner.

After a quick stop back at the hotel, we rode over to the Route 66 Museum. The museum was $5 each and filled with all things RT 66.

The museum got us in the mood for some Ice Cream, so we stopped at Braum’s on our way back to the hotel.

We were up and on “OK 183” before 6:00 and before 7:00 I was pulled over by a State Trooper. He only gave me a warning and he was so nice I almost thanked him for pulling me over.

At Us 60 we turned right and started east. We stopped in Fairview for breakfast at the “Simple Country Kitchen”. It was a true small town cafe, the waitress sat down at our table to take our order and knew everybody’s name but ours.

You had the option of homemade bread or biscuits to go with your eggs and hash-browns. This was one of those places you love to find on the road.

We rode US 60 into Bartlesville and spent the next day and half with the in-laws. It was nice seeing them and my mother in law stuffed me with deviled eggs. Good deviled eggs are one of those things I just can’t pass up and she kept making more of them for me.

On Sunday we got up at 5:00 and were on the highway by 5:30. The water in the air was making it feel very cool at highway speeds.

In Lamont we halted for a quick picture with their tank, it’s a small place, but they have a tank.

In Enid we stopped at “jimmy’s egg” for breakfast because it was packed with cars. Sometimes lots of cars doesn’t mean it’s a good place to eat. This was one of those times, not a place I’d visit again.

We followed US 60 all the way to Amarillo and checked into the hotel at 12:30. After unpacking we consulted the “Local” app for a place to eat. We found “Joe Taco” just a few miles from our hotel. It was raining so being close was a plus.

We had jalapeno poppers and fish tacos both were good and we enjoyed our meal. After eating we headed back to the hotel for the vacation part of our trip. Spent some time by the pool and then chilled out the rest of the day.

We were up at 5:30 and on the road while it was still dark. We even got to see the sun come up twice for some reason. As we traveled west it dropped below the horizon for about 30 minutes and then I got to watch it rise again in my mirror. Made it back to Albuquerque, ate some breakfast and was back at work by 10:30.
Category: 500+, Hotel Trip, Loop Ride, New Mexico, Oklahoma, Texas /