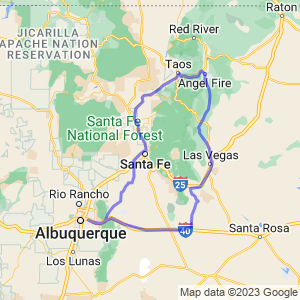 My daughters basketball tournaments kept me from taking any long ride for the last few weeks, so I was really looking forward to getting out on the bike. Originality I was going to do an overnight ride with some camping, but I decided to cut it to a one day because of the rain.

We got an early start, planning to eat breakfast in Taos and hopping to get home before the afternoon rains. We took NM 14 north to Santa Fe, the sun made a couple of the curves hard to navigate. Normally riding east puts the sun in your eyes, but this time of year it’s riding north that does it. Madrid normally filled with activity was very empty and quite before 7:00.

We used NM 599 to bypass Santa Fe and in Espanola caught NM 68 for the 36 mile trip into Taos. When it’s possible I ride NM 68 in the early morning, the light of the rising sun and the Rio Grande make a beautiful combination.

Some people feel the high road to Taos is the most scenic, but for me the low road along the river provides the best views. Especially in the dawn’s early light.

If you come mid morning on the weekends, plan on waiting to get in. We beat the rush and really enjoyed on breakfast. We left Taos on US 64 and caught the road east down the mountain. This section of road is filled with curves and very few places to pass. At NM 434 we turned south and took this narrow highway through the mountains to Mora. In Mora we caught NM 94 and lots of rain. It was a hard mountain downpour with a touch of sleet.

It stopped raining just outside Las Vegas and we found the 123rd Annual Fiestas de Las Vegas in the downtown plaza. There was music and lots of booths with games, food and merchandise for sale.

After walking around the fiesta we returned to our parking spot and started for home. We gassed up just outside of town on I 25 before hitting rain again. We took NM 3 and went south about 1 mile to La Risa Cafe for some pie. La Risa is a small family owned place and the food is outstanding.

The rain wasn’t too bad till we hit I 40, then we went through several bad spots, complete with cars slowing to a crawl. As we got to Albuquerque it stopped raining just outside the city limits.  This is an amazing loop, one I plan to do again, it has some Interstate, but mostly it’s 2 lane highways weaving along the Rio Grande and through the mountains.