Ride to Sipapu with AMRG 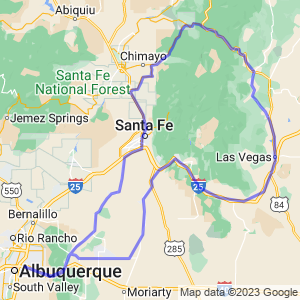 My daughter and I were going to Colorado for the weekend and started to pack for the trip. Then Friday night she got invited to the comic book convention and I was told about a meeting at 4:00 on Saturday I needed to attend.  So we canceled the trip.

Because my meeting was in the afternoon, I still had the morning to ride. There was a AMRG ride planned and I signed up to join it. Ate some breakfast and headed for Santa Fe where the ride was starting. It was posted as an fast ride and lots of sport bikes showed up.

As the group made their way up US 285 it was clear most of the riders were ready to run. As sometimes happens on public group rides not everybody was on the same page. One of the riders didn’t feel comfortable riding at speed and I rode with then to Sipapu.

It was slow going and we had a caravan of cars following up the twisting road. At times I almost felt like I was in a parade, but I really had a chance to take in the scenery. It was a different riding slower than the speed limit, but I have to admit I enjoyed it.

When we got into Sipapu I got off the bike and started to head in for lunch. But first I check my phone for the time, it said 1:45. So I got back on the bike and hit the road. If it’s 1:45, I have to cover over 200 miles in less than 3 hours to be on time for my meeting.

Now I’m riding alone and I’m pushing it, where on the first half of the ride I was looking at everything, now my eyes never leave the road. As I’m riding through Las Vegas I see a sign with the time and it reads 12:55. Now I really feel stupid, I’m guessing I mistook 11:45 for 1:45.

I stopped for gas south of Las Vegas and then took I 25 south to US 285, then used NM 41 to make my way south to Albuquerque. I did get back to Albuquerque before 3:00 and ended up eating lunch with my wife before going to my meeting. It was the tale of two rides, one half relaxed and the other pressed and the truth is I loved them both. Sometimes it’s good to slow down and smell the pines.
Category: 301-400, Loop Ride, New Mexico /