Ride to Ute Lake State Park to see the 12th Annual Chuck Wagon Cook Off with dinner at Annex—Took I 40 east to Tuccumcair, then US 54 to Logan, then east on NM 540 to Ute Lake. We returned using the same route.

This was ride with an overnight but I’m posting it as one ride.

The ride was 394 miles with about 6 hours of ride time to Logan and back. 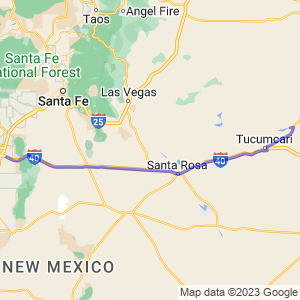 While searching the Internet for different events around New Mexico I came across the 12th annual Chuck-wagon Cookoff at Ute Lake right next to Logan New Mexico. Having never seen a Chuck-wagon cookoff, this was a perfect reason for a ride (not that I need a reason).

Two fellow Valkyrie owners (Steve and Chuck) joined me for this event. We could have left Saturday morning, but spending Friday night at Ute Lake seemed like a better option than riding 3 hours east into the rising sun. Leaving Albuquerque at 4:30, we rode straight to Logan with one quick stop for gas in Santa Rosa. We made great time on this windy truck passing ride. It was a good that we rode as fast as we did, because just as we finished setting up our camp, the sun went down.

After our tents were set up and ready for the night, we got back on our bikes and rode into to Logan for dinner. We ate at the Annex and it was one busy place. While waiting to order we started talking with a couple of guys that drove up from Tuccumcari, they said Annex was the best place in the area to eat.

My hamburger smothered in green chile and cheese was very good and reinforced everything those two Tuccumcarians told us about the restaurant.

After dinner we headed back to camp. We sat under the stars talking for a couple of hours before retiring to our tents. That night the wind was really blowing, a couple of times it whipped so hard, the side of the tent slapped me awake.

In the morning the winds had dropped off a some, but it was still blowing hard enough to making the folding of tents and tarps an adventure.

It only took us about 30 minutes to break camp and pack our bikes.

We made our way over to the site of the cook-off and wandered around the different wagons. Each of the wagons are authentic chuck wagons and use cooking utensils from that era to prepare over 30 meals each using an open fire.

The wagons are all given the exact same ingredients to start with.Then they each make their own version’s of chicken fried steak, beans, biscuits, potatoes and apple cobbler.

We looked at all the different wagons, each owner freely talked with us about the history of their wagons and the tools they used for cooking.

The Canadian River Renegades a Non-Profit Organization runs the Chuck Wagon Cook-off to provide scholarships. They sell tickets for all the meals made by each wagon to raise money. The tickets for this event were sold out on Friday. But I called the very nice lady that runs the event earlier in the week and she held some tickets for us.

As it got closer to lunch time the crowd started to build and soon they were ringing the bells that call you to dinner.

My lunch was outstanding, by the time I remembered to take pictures of the food we had already eaten it. But I did get a picture of the empty plates. The wagon (Rising W) that made my lunch took first place for biscuits and cobbler.

The cook-off was a lot of fun, we met some great people and ate good food, all for a worthy cause. The American Chuck Wagon Association web site has a list of events they have planned for the the year. As we were eating we were already talking about catching another event. The 2013 Cook Off at Ute Lake will be on April 27, 2013 if you would like to attend.

While they started on the dishes we started for home.

After stopping for gas in Moriarty we pulled over to say our goodbyes before heading our separate way. Three riders from Santa Fe stopped to talk with us.

We talked with them for 15 or 20 minutes before getting back on the road. It’s always amazing how motorcycle owners all seem to find common ground in riding. Steve, Chuck, thanks for going with me, I really enjoyed your company, it was a first-class adventure.