Ride to Capulin Volcano with breakfast in Las Vegas and dinner in Raton–Took I 25 to Raton, then US 87 to Capulin, north on NM 325, then west on NM 72 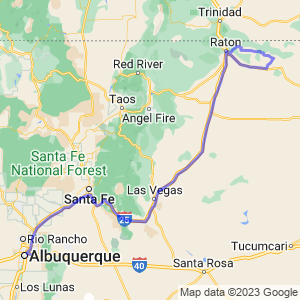 This week my daughter joined me for a ride to see the Capulin Volcano and explore some family history. My grandfather moved to New Mexico in the early 1900’s and homesteaded around Logan. Several years later he and my grandmother built a farm just north of Springer. In 1945 they sold the farm and moved their family to Oklahoma.  When my grandparents died they were both returned to Raton to be buried in their family’s plot.

We got an early start to give us plenty of time to explore Raton and see the volcano. We took  Interstate 25 north stopping in Las Vegas for a quick breakfast at Johnny’s Mexican Kitchen.

We both got the breakfast special with chorizo, the chorizo was outstanding and we both really enjoyed our meal.

After breakfast we filled up the bike and started back north on I 25 for the 104 miles to Raton. We tried to visit the museum in Springer, but it was closed.

At 11:30 we checked into the KOA in Raton and dropped off our gear.

We found the cemetery where my grandparents were buried without any problems, but it was a big place. The cemetery didn’t have any index or map, so it took us about an hour of looking around and two phone calls to find the graves.

We left Raton heading east on US 87 for the 37 mile ride to Capulin Volcano National Monument.  There was road construction that reduced speeds and slowed traffic along this part of the highway. In Capulin we turned left onto NM 325.

We entered the Capulin Volcano National Monument  and drove to the the top. At the top we were treated to some amazing vistas and could see the snow covered rocky mountains of both New Mexico and Colorado.

This volcano even comes with a big crater at the top. There are two trails one that goes down to the bottom of the crater and another that circles the rim.

Leaving the Capulin volcano we continued north to Folsom. This is the area where they found the Folsom man. The museum in Folsom was closed as well, the web site said it would be open, but it wasn’t.

In Folsum we turned left onto NM 456 for about one block, then left onto NM 72, finding NM 72 is a little tricky so be careful.

NM 72 is not in the best condition and many of the turns surprise you with gravel. However if you’re in this area, this is the road to take. This highway bends and curves across Johnson Mesa.

Johnson Mesa is a high plateau that in early 1900’s had a hundreds of farmers and town called Bell located on it. There was a church and even five schools. In 1933 the post office in Bell closed and  today nobody lives on the mesa.  All that’s left from their effort is the church and the cemetery.

We got back to Raton around 3:00, giving us just enough time to see the Raton museum before it closed. We walked around the downtown and visited a couple stores. Then we went back to the KOA and set up our camp.

We had dinner at the Oasis Restaurant, it’s located on the southern end of town. The service was good and the place was clean, but the food was average at best.

After dinner we went to a talent show put on by the Lion’s Club at the Shuler Theater. The Shuler theater is almost 100 years old and is very ornate.

We enjoyed the show, there were a couple of very talented performers. At the end we won a door prize of flowers from a local florist. One of the performers (teenage girl) did a fantastic job and we gave our prize to her father, so he could give her some roses.

With the show over we headed back to our tent to get some rest before our ride back tomorrow.