Ride to Pie Town with the AMRG

The ride was 330 miles with about 6 hours of ride time. 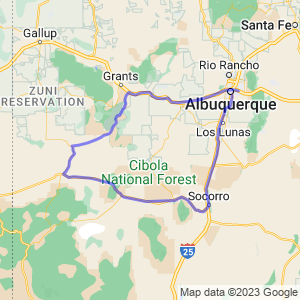 This weekend we were hit with a storm that brought high winds and some rain/snow to most of the state. By Sunday the storm had mostly passed, but it was still much colder than normal, with a 30% chance of rain on the route. So I was very surprised when 11 bikes showed up on this 40 degree day from the Albuquerque Motorcycle Riders Group (AMRG) for a ride to Pie Town.

The meeting/starting point for the ride was at the Denny’s on Coors.

I’m not a fan of chain restaurants, but today this Denny’s did a good quick job with my breakfast.

After a brief meeting we started west on I 40 for about 60 miles of windy truck passing. There is nothing like holding you place in formation as the wind gives you hard slaps before and after each truck.

In New Mexico there are several places where you can drive over 70 miles and not pass through any towns or even see a building. The next leg of this trip is one of those areas, so we exited at the Sky City Casino for a gas stop before starting south.

From Sky City we took State RD 124 west to NM 117, it was nice to get off the Interstate and onto an empty two lane highway.

We rode about 20 south on NM 117 before stopping at the Arches for pictures. In this area there were small patches of snow on the ground from yesterdays storm.

With clouds threatening on the horizon and no shoulders or pull outs for the next 40 miles I put on my rain pants while we were stopped.

The group broke and ran for the next forty miles to NM 36.

Along this section of highway to get out of the wind, about 60 cows had huddled in a small depression next to the road. As the front bikes passed, the noise scared the cattle, causing then to jump up and run away from the highway. This mini stampede was quite the sight, one I will always remember.

After regrouping we made our way south on NM 36 for the next 29 miles into Quemado and gas.

In Pie Town we stopped at the Pie-O-Neer for lunch. Because I got distracted by the engaging conversation at lunch I forgot to take pictures of the food.

Last time I was at the Pie-O-Neer I filled up on their stew and didn’t have pie, this I regretted for weeks. On this trip no lunch for me, just pie. I had the Apple/Green Chile/Pinon pie, the flavors went together in a way I never expected. It was delicious and if you ride US 60 stop in and give it a try.

I’ve ridden this part of US 60 several times in the last few months. On every visit I stop and look at the VLA, it’s so impressive.

It was a hearty group of riders that braved this cool windy day for this ride. I enjoyed and appreciated their company.

The last part of the ride back to Albuquerque was gas and go.