Ride from Silver City to Albuquerque

Ride from Silver City to Albuquerque with a stop for lunch in Socorro–Took US 180 north to Reserve, then NM 12 north to US 60, then east to I 25 and north to Albuquerque. 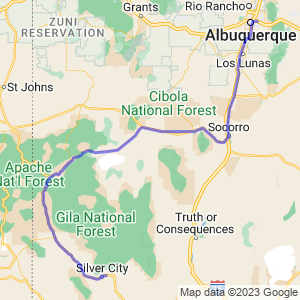 During the night my wife had to get up once (around 1:00 AM) for trip a to the bathroom and she got cold during the night. These were two things she really didn’t like about staying in the tent. She did requested a queen size air mattress and two sleeping bags that connect together for our next tenting trip. Guess that means there is going to be a another camping trip.

My wife headed off to freshen up and by the time she returned, I had most of our camp down and packed. She helped me folded the tent and we strapped our gear to the bike.

Once we were packed and ready to ride, we got our neighbor to take our picture

We stopped at McDonalds for a quick-cheap breakfast. Then we left Sliver City heading west on US 180 to Reserve.

US 180 took us north into the mountains, it was a beautiful day with the early morning sun providing us with stunning vistas.

Just before Buckhorn we came upon a herd of deer feeding right next to the road. As I slowed down they ran across the road right in front of me, causing me to stop. Then they leaped the barbwire fence paralleling the road, it was like their legs were springs, bouncing them from place to place.

About 7 miles out from Reserve we turned onto NM 12.

We filled up in Reserve and stopped to look at the statue they built of Elfego Baca. Elfego Baca was made famous by the Frisco Shootout, a gun fight that occurred in 1884 in Reserve. The battle pitted Baca against 80 Texas cowboys and lasted over 36 hours. They say that over 4000 rounds were fired and the cowboys running out of ammunition was what ended the gunfight. When Baca was brought to trail for the two cowboys he killed, to help prove he acted in self defense, Baca’s lawyer produced a door with over 1000 bullet holes.

We followed NM 12 north to US 60, good thing we got gas in Reserve, because the station in Datil was closed on Sunday. We stopped at the Very Large Array and took some pictures, the site of these big dishes pointing at the sky always sparks my imagination.

We were going to have lunch at the Magdalena Cafe, but it was not open on Sunday either, so we rode on to Socorro.

In Socorro we stop at Sopia’s Kitchen, it’s 1/2 block west of California Street(US 60) on Bullock. Sopia’s Kitchen was very busy with an after church crowd. It even had live entertainment on a small stage in the back. We both had Huevos Rancheros with green chilie, the chilie was hot but not to the point of overpowering the taste of the food. Our lunch was very good, making this the first restaurant we have liked in Socorro.

After lunch we filled up the bike and started south on I 25 for the last 80 miles into Albuquerque. When we got home I loved hearing the excitement in my wife voice as she described parts of our adventure to our daughter.