Ride from Albuquerque to Clayton NM

Ride to Clayton New Mexico with stops at the Tucumcari Historical Museum, Amistad “Little House” Museum and Herzstein Memorial Museum in Clayton. Took I 40 east to Tucmcari, then US 54 to Nara Visa, north on NM 402 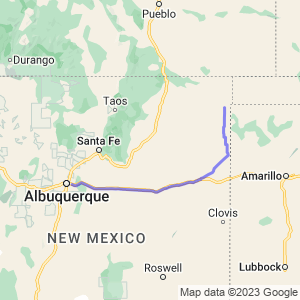 Time and money are the two main things that keeps me from taking longer rides. The cost for hotels on extended rides is a limiting factor.  My plan to reduce this large amount paid for room and board was learning how to comfortably motorcycle camp.  So, several weeks ago I made a decision that to achieve my goals with riding, it was time to start motorcycle camping. I spent hours figuring out what I felt was needed to camp and then  built my kit. I planned this overnight ride to Clayton as a test, a shake down run. While just a simple trip, the stakes of comfortably camping from the back of the bike seems huge to me.

After I eating breakfast at home, I started my ride at 8:30. The route I picked took me east on I 40 for 160 miles. I stopped in Santa Rosa for gas at a station close to Park Lake, but I didn’t ride over.

Got back back on the Interstate for the 70 miles to Tucumcari. While there was no wind, I did seem to be catching more draft than normal from the trucks. I might have created a sail like effect by packing the gear on the luggage rack instead of the back seat.

In Tucumcari I stopped at the Tucumcari Historical Museum, It’s located in a 1903 school house with every room and the basement filled with old knickknacks donated by the local residents.

Around the school house are several more buildings all filled with exhibits, one had old gaming supplies from the 20’s, another was filled with old wagons.

There was even a jet plane and a caboose. I’ve always wanted to see the inside a caboose and this was open to be explored.

From Tucumcari I took US 54 to Nara Visa where I turned onto NM 402.

Nara Visa has some fascinating old buildings that will be totally gone in a few more years, it’s really too bad. There is a lot of history rotting away in those buildings.

While riding NM 402, I saw more herds of Antelope than I saw of cattle. When I’d stop to take a picture they would run away before I could get the camera out and snapped. Then I found one group lying down right next to the road, so I was able to get some pictures of them.

Just off NM 402 about 50 miles south of Clayton is the town of Amistad. Amistad is made up of a church, couple of old buildings and the “Little House” Museum. The museum is in a house that was bought from Montgomery Wards.

When I got there the door was open and nobody was there, so I looked around and took a couple of pictures. Guess it’s different in the country, you would never find a museum unattended in the city.

I continued north on NM 402 to Clayton. In Clayton the first thing I did was visited the Herzstein Memorial Museum because it closes at 4:00.

Like the other two museum I visited today, it was filled with local heirlooms. However this museum was located in a beautiful old church.

I’d given some thought to eating lunch in Logan, but I wasn’t hungry. Now it was after 4:00 and I was starving. Several locals I talked with recommended the Rabbit Ear Cafe as the best place in town to eat.

Had a Green Chilie Cheeseburger with tater tots and Apple pie. The burger was very good, but I had higher expectations for the pie.

After eating I setup my tent and got ready for the evening. It only took me two tries to get the tent right.

Because there was no other shade, I sat in the door of my tent and worked on my computer. As the sun was starting to set a rabbit came within inches of me, before figuring out I was there and hopping away.

Then it was time to call it a day and climb into the tent for a good nights sleep.