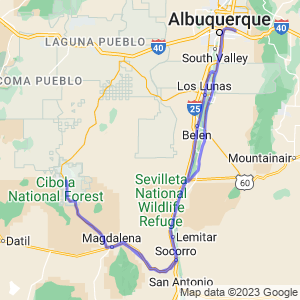 Several weeks ago I got a “New Mexico Road and Recreation Atlas”, it provides special information on the roads, telling me if they are paved or unpaved. This knowledge of pavement is an important fact that Google maps does not share. Using this new tool, I found out NM 169 is paved from Magadalena to Alamo, giving me a new road to explore.

Using NM 47 and 304 we made our way south to Soccoro, from there we took US 60 west 22 miles to Magadalena. I used as much 2 lane highway as possible on this trip and avoided the Interstate whenever possible.

The house you see on the rise just as you enter Magadalena was built in 1909 by Joe Hilton. He built this house on a small hill of solid rock that was once used as a rock quarry for the town.

We passed though Magadalena and then headed north on NM169 for the 29 mile ride to Alamo.

NM 169 runs through the Cibola Nation Forest and some private land before it enters the Alamo Navajo Indian Reservation.

For the first 20 miles we drove along wide open spaces where the highway, signs and the fences running parallel to the road are the only sign of man, as far as you can see.

As we neared Alamo the traffic really increased and small pockets of building appeared on both sides of the road.

Alamo had a store and a gas station, the price of gas was lower than in Magadalena. There was small market area filled with booths that were empty. I’ll have to come on a Saturday to see if it’s full of vendors. It would fun to see what types of merchandise they would sell in this open air market.

It is possible to take a dirt road north all the way to I-40, but I don’t like riding my bike on gravel for many reasons. So we rode back to Magadalena for lunch.

We ate at the Magadalena Cafe it’s located on north main street in an old historic building across the street for the Marshal’s Office.

The inside of the cafe was superb, filled with old pictures of early motorcycles and a polished wooden floor.

After a excellent lunch we start back home. The temperature had moved into the mid 70’s for the ride home.

It was so warm riding home I took off my jacket and sweatshirt. The pleasure of riding with the feel of the sun and the rush of the wind has been missed these last few months. I stopped for gas in Soccoro and covered myself with sun screen.

The trip was so much fun. I got to ride a new (to me) highway and explore a part of New Mexico for the first time. I’m glad my daughter was there to share it with me. Another Good Day!!
Category: 251-300, Loop Ride, New Mexico /