Ride to see Quarai and Abo ruins with lunch at the Ancient Cites Cafe and a stop at Benny’s in Bosque Farms—Took NM 313 east then right onto NM 217 continued south on NM 337, right on NM 55 to Mountainair, then right on US 60 to NM 47

The ride was 150 miles with 3 hours riding time. 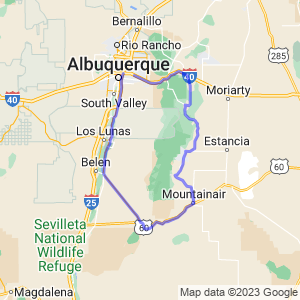 My friends don’t ride and most of them give me that “you must be crazy look” when I talk about it. Networking on the internet has introduced me to many other riders, people that share my love of the open road. Early in the week I got a message from a new rider (Adrian) asking me if I’d set up a ride to the Ancient Cities ruins.

I posted the ride for Saturday on AMRG website and had a couple of other riders joins us (Mike and Hakan). On Friday a storm passed through and really dropped the temperature. It was a brisk 28 as we were getting ready to start the ride.

We started east on NM 313 and took NM 217 south, cutting out the leg through the mountains on NM 337. It was a little breezy, just enough to keep the temperature down.

At the turn to NM 55 we stopped and took a break to warm up. It was still under 30 and you could feel the chill.

The next stop was 16 miles down the road at the Quarai ruins. The trails to the ruins were closed because of the winds. So we warmed up in the buildings and talked to the ranger for a few minutes before riding to Mountainair for lunch.

Because the trails were closed we didn’t ride the 25 miles south to Gran Quivira.

We stopped for lunch at “Jerry’s Ancient Cities Cafe”, it fit perfectly into the theme of the ride.

After lunch we rode the 8 miles south to Abo.

We were given the talk in a nice warm (really too warm) room, because the trails were still closed because of the winds.

After we left Abo, riding east on US 60 we passed a couple of freight trains going in opposite directions. It was like watching a giant model train set.

We stopped at Benny’s and talked before ending the ride. For Adrian this first ride was not easy, still he handled it very well and I hope he enjoyed it.  I had fun with this group, even if the ride did start out a little cold and the ruins trails were closed.
Category: 101-200, Loop Ride, New Mexico /