Ride was 320 miles with about 6 hours riding time. 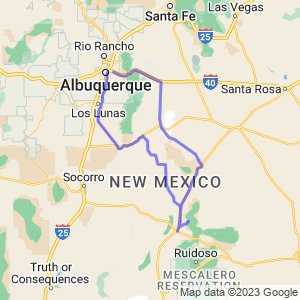 White Oaks was one of those towns I’d passed by several times in the last year and just never made the 10 mile ride over to see it. Then a couple of weeks ago as I rode past the turnoff to White Oaks on my way to San Antonio I got it in my mind to ride out and see the place. So I planned this ride.

My daughter’s team had lost their game on Friday, so she didn’t have basketball practice and decided to spend the day with me. Also joining us on the ride were Chuck (F6Banger) and Hakan. Hakan was heading over to Ruidoso to spend the night camping, so he was just riding to Carrizozo with us.

We took the the Interstate to Moriarty exiting onto NM 41 and headed south. As we started south the crosswind became very noticeable. We stopped for gas in Estancia, it was a quick top-off and back on the road.

South of Willard there is a very large wind farm, from what we were experiencing they should be getting lots of power out of them.

Riding with a gusting crosswind can really make your bike dance. At the stop, Chuck told me how I looked tilted, like I was leaning into a turn just to ride straight. If the wind would have just not been gusting, it wouldn’t have been a problem.  Couple of times while turning, the wind would blow me up, creating the same effect as hitting your brakes. This high wind side-effect  was something I didn’t enjoy.

Just before we rode into White Oaks, we came upon a head of Antelope. I stopped for a picture, but that cause them to move off.

White Oaks New Mexico was named for the white oak trees that grew in the area. White Oaks was a gold mining town, that at one time was the third largest city in New Mexico. Now there in only a few building left, one of then is the “No Scum Allowed Saloon”.

The bar looked like a lot of fun, it was small, but it looked like it could handle 100s of people.

We got to talking with the owner of the No scum and he offered up a flat area to setup tents and food if we wanted to comeback some time and spend the night. It might be a lot of fun when it warns up to come down with a group and spend a Saturday night partying.

It was an 11 mile ride from White Oaks into Carrizozo and lunch at Elsie’s Burgers.

Elsie’s was a place where Chuck had eaten before and he recommended the burgers. Chuck was right the burgers were worth the stop.

After lunch we said goodbye to Hakan and he left us to ride on to Ruidoso.

We rode back north to Mountainair and on past Los Lunas, before stopping for gas. We made great time coming home with the wind at our back most of the way. It was very warm for a winter day, if not for the wind perfect riding weather. However in this part of the country wind is just part of the experience.
Category: 301-400, Loop Ride, New Mexico /