Ride to San Antonio with Lunch at the Buckhorn Tavern 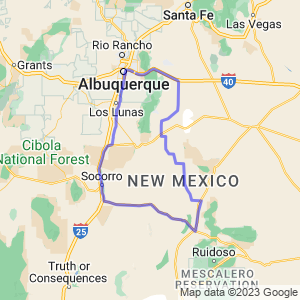 The previous weekend I had planned to ride to Carrizozo, but a cold front forced me into a shorter ride. There was a ride posted with “Let’s Ride New Mexico” and they were going to San Antonio for lunch. By Friday night only one rider (Hakan) had posted to go. So I sent Hakan an e-mail explaining I had a longer ride planned but would join him if nobody else signed up. When I checked the site Saturday morning, two others had signed up for the ride. So I called and let Hakan know I would meet them at the Buckhorn for lunch. I started my ride at 8:30, so I would arrive at the Buckhorn Tavern around the same time as Hakan’s group ride.

The weather was so nice on Friday, I forgot to give Old Man Winter his proper respect. After about 20 minutes on the Interstate I had to exit on NM 333, because I couldn’t handle the wind chill at speed. After adding some layers and a face shield I was back on the road.

There is nothing I hate more than looking through plastic, so it has to be really raining, hailing or very cold to force me into using a full shield. I gassed up in Estancia, it was quick stop, didn’t even get off the bike.

While riding on NM 41 and NM 542 I didn’t see anyone, they were the perfect definition of deserted highways.

It was my first time riding NM 542 and with the exception of one man made hill of cow manure (sorry no picture-the smell kept me moving) it’s a very flat area.

About 20 miles from Mountainair NM 55 takes a right at the Gran Quivra Ruins.

While I taking some pictures two other riders headed for lunch in Ruidoso pulled over to take a break.

I stayed and talked with them for a few minutes while they had a smoke. While we were talking a small group of BMW’s rode past us on the way to the ruins.

Rode into some very cold head winds on the last part of NM 55 before turning north on NM 54.

Filled up in Carrizozo before heading west on US 380. It seemed warmer and the wind was going to be at my back, so I took the face shield off my helmet.

Just outside of Carrizozo is the Valley of  Fires-it’s a lava flow about 6 miles across.

Made good time on US 380, the traffic was moving and I followed along, pacing with a Camaro into San Antonio.

Got to the Buckhorn about 10 minutes before my planned time, as I was taking off my gloves, my phone rang. It was Hakan wanting to know if I was almost there.

The Buckhorn Tavern is famous for it’s “throw down with Bobby Flay” over green chile cheeseburgers. The episode aired in 2009, making the Buckhorn a well know burger stop. It’s only open on Saturdays from 11:00 to 2:30 and it’s very crowded. Except to wait!!

Hakan was inside waiting, nobody showed up for the his ride and he came down alone. We enjoyed our lunch, then took NM 1 into Socorro for gas. Then it was north on the Interstate and home.

I can’t say that this was a good ride, there were a couple of times I thought about cutting it short and heading for home. Where I was expecting temperature in the mid 50’s, I got low 40’s and colder. Near the end of the ride it dropped below freezing. I’m still glad I was able to get out, better riding cold, than not riding at all.
Category: 301-400, Loop Ride, New Mexico /