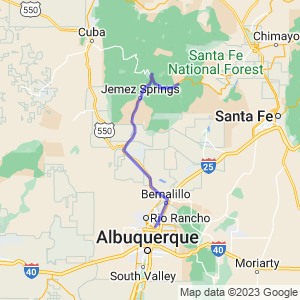 Every year the AMRC has a New Years day ride and it’s an event I’ve attended for the last few year. The group meets at Murphy’s Mule Barn and then rides around town for a couple of hours. Normally it’s really cold and I get a short ride to start out the year. But this year it was climbing into the low 50’s and I wanted to get out and do a longer ride.

My wife told me that this year she wanted to join me on this first ride of the year. We started the day by driving over to Murphy’s Mule Barn and eating breakfast with the AMRC riders. After eating we spent a few minutes socializing, it was a big turn out and there were lots of people.

Yesterday I mentioned to Mike that I might take a run to the Jemez instead of riding around town and he expressed a desire to join us on the ride.

Five of the AMRC riders wanted to ride around some before their ride got started, so we followed then north on NM 313 to Bernalillo. They turned around and we started north on US 550 for 26 miles to NM 14. This was the chillest part of the day, it’s funny how much colder you get the faster you go.

We were unsure how far into the Jemez we wanted to ride, but after asking a hiker about the roads ahead, we rode to the Valles Caldera National Preserve.

There were areas of the highway that haven’t seen the sun for sometime and they were heavily salted. The salted road looked like ice, making it hard to distinguish between an icy and salted areas. Luckily there were very few snow covers places left on the road, all in the dark or shaded areas.

As we moved farther into the mountains the snow got deeper.

It was a enormous thrill to start the new year  exploring the snow covered Jemez mountains with my wife.

After taking in the Valles Caldera we started back to Albuquerque.  We made one quick stop for pictures and adjusting our gear before hitting US 550.

In Bernalillo we stopped at the Flying Star for some hot chocolate and a little conversation.

This ride was the perfect way to start the new year. Seeing the Jemez mountains like this from the back of my Valkyrie was a first for me. Honestly I was a little cold a couple of times, but it was a lovely day, with almost nobody else on the road. Mike was first-class company and the rush I felt from this ride kept me up late into the night.
Category: 101-200, Loop Ride, New Mexico /