Ride is about 290 miles with 6 hour ride time 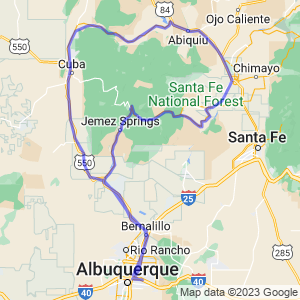 My daughter had an activity for her basketball team and my wife had other plans, so I was making this ride solo. I gave some thought to posting the ride with AMRG, but decided to head out by myself. My last lobo ride was back in September, so I was excited for this ride.

I dropped my daughter off at her school at 7:30 and then headed home to start my ride. The mornings are starting to be very cool, so I geared up for cold weather. As I cut across on NM 556 I could see several hot air balloons launching in the valley.

While riding south on NM 313 I saw about nine wild turkeys out in a field, it was the first time I’d seen turkeys in the wild. I turned the bike around and stopped for a picture, but I spooked them and they disappeared into the trees.

I was starting to feel the cold by the time I hit Cuba, so I stopped for gas and warmed right up. It’s amazing how stopping for just a couple minutes makes a difference.

Riding NM 96 in the morning light really gave me some views that I’ve never noticed on this road before. The sun was hitting the mesa walls, making them stand out. The leaves in the trees were a bright yellow, making the color come alive against the sky in this arid area.

Just before I got to the Abiquiu Reservoir I saw a grove of trees off to my right and a road (Co RD 194) that made it’s way over to them. It was paved so I rode several miles up the asphalt past a couple of farms and to the base of the mountains.

I stopped at Abiquiu Reservoir for a couple of pictures, then drove over to US 84. I stopped just before the town of Abiquiu where you can see out over the valley with the river winding through it.  I passed through Espanola and went on to White Rock where I filled up before getting on NM 4.

As always I really loved riding NM 4, it’s just one of those great roads. It weaves through the mountains proving lots of scenic views.

While stopped at Battleship rock for a couple of pictures I started talking with a guy from London. It was his first time on the highway and he was in awe of it’s beauty. His enthusiasm reminded of how special New Mexico really is and how glad I am to be able to explore it.

After I passed Jemez Springs and hit the lower valley, it was alive with color, trees along the river had turned to a glittering yellow. This landscape was something I saw last weekend and its splendor brought me back to see again.

I didn’t stop for lunch so I could make it back home in time to take care of a few things. It was nice being out by myself, it does add an extra sense of freedom.
Category: 251-300, Loop Ride, New Mexico /