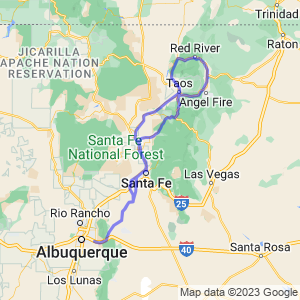 We headed over to Einstein Bagels at 8:30, my daughter had a bagel while we waited for Rick. Rick was joining us for the ride around the “Enchanted Circle Scenic Byway”. We were planing on kickstands up at 9:00, but we got started a little earlier. 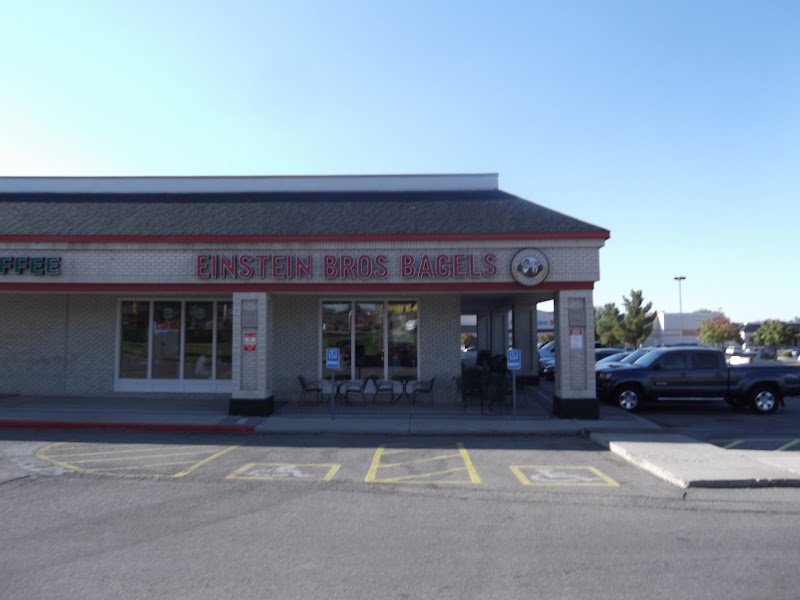 We rode with light traffic on 313 to 14 and made good time to the Santa Fe bypass 599. I made a quick stop for gas (Rick watched) at the station on the corner of 14/599.  Next we headed up 599 to 285, took 503 to 76 letting us avoid Espanola on the way up. There was lots of slow traffic on these roads. They were having an Art rally of some type and yellow signs with different numbers could be seen along the road. As we went north on 518 you could see the mountains we would soon be riding. 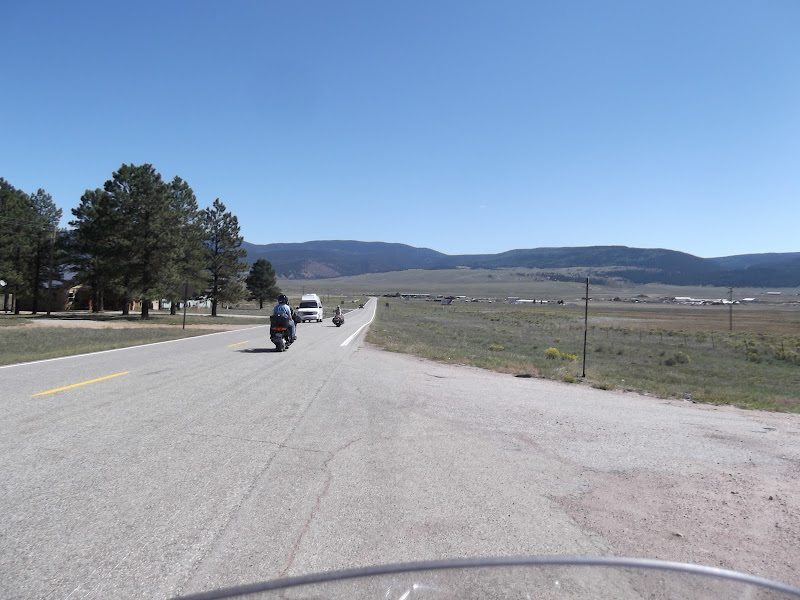 We made great time to Taos, where we planned to eat lunch, instead we did a gas and go at the station next to 585 (the bypass to 64).  We decided to wait till we got to Eagle Nest to eat. The leaves were just starting to turn in the tops of the tree, so there was some color. We found lots of other bikes on this stretch of road, this a very poplar ride this time of year. 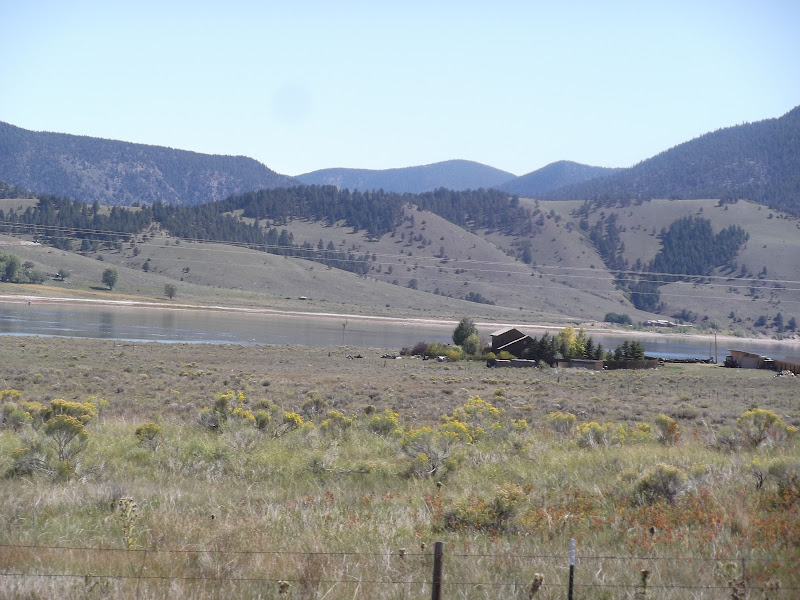 I really enjoyed the twist and turns as you drop down to Eagle Nest, it’s easy to see why everyone enjoys riding it. 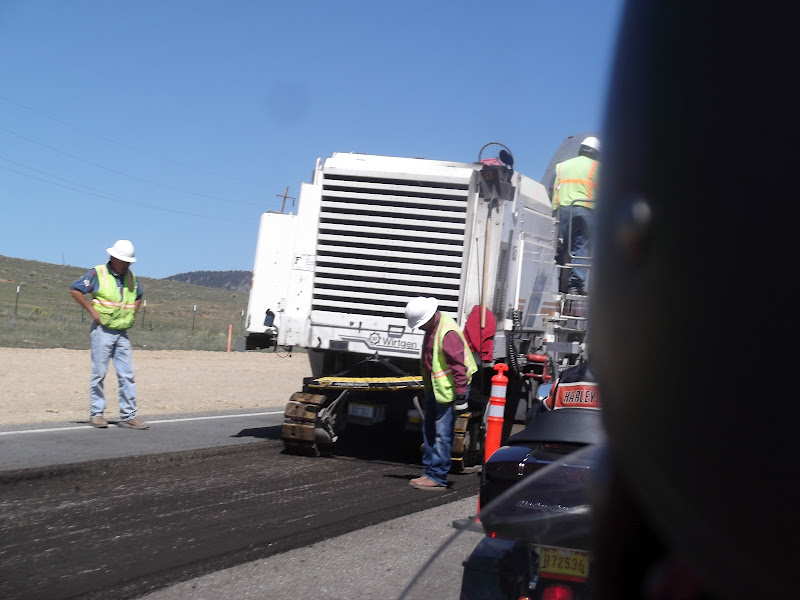 We found some road construction just before we got to Eagle Nest–there was some dirt and stopping of traffic. 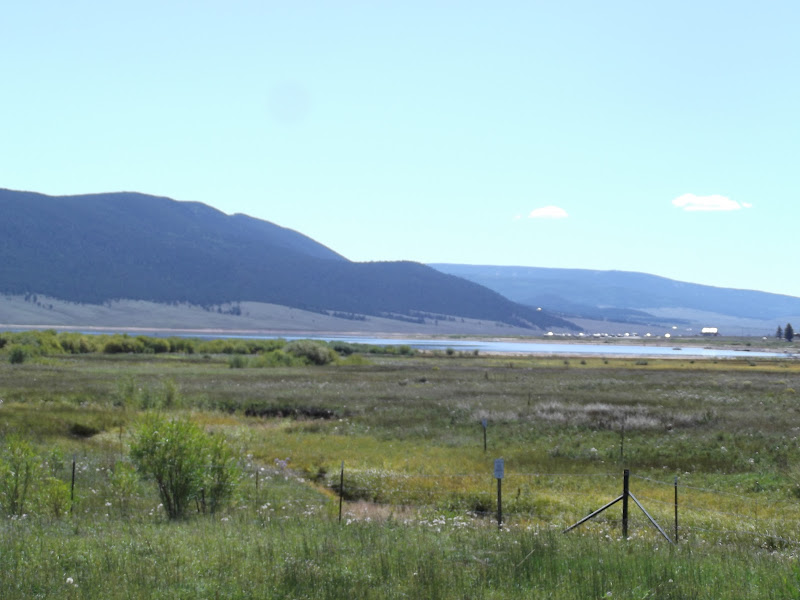 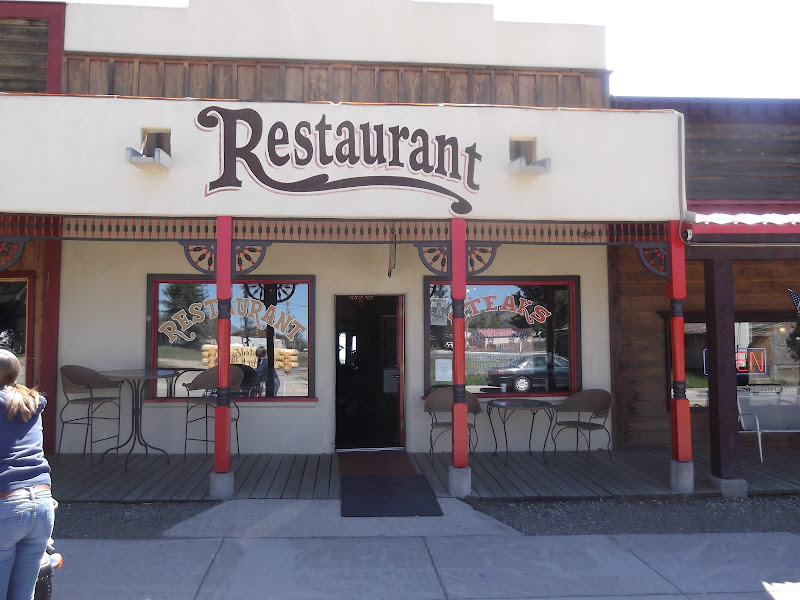 We stopped for lunch in Eagle Nest at Calamity Jane’s, a place that Rick knew about. It’s a old brothel and the place was filled with personality. 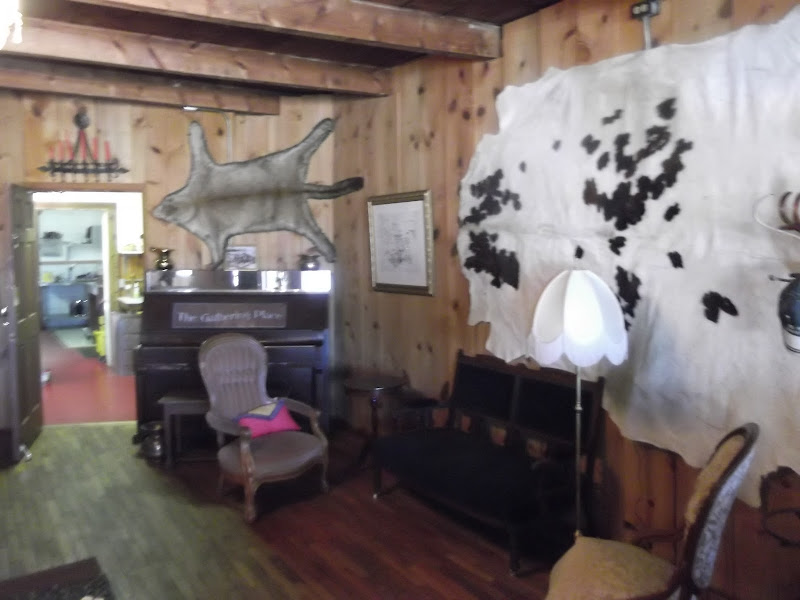 I had some Green Chile and Cheese soup that was very good. Allie and Rick both had hamburgers that they looked pleased with. 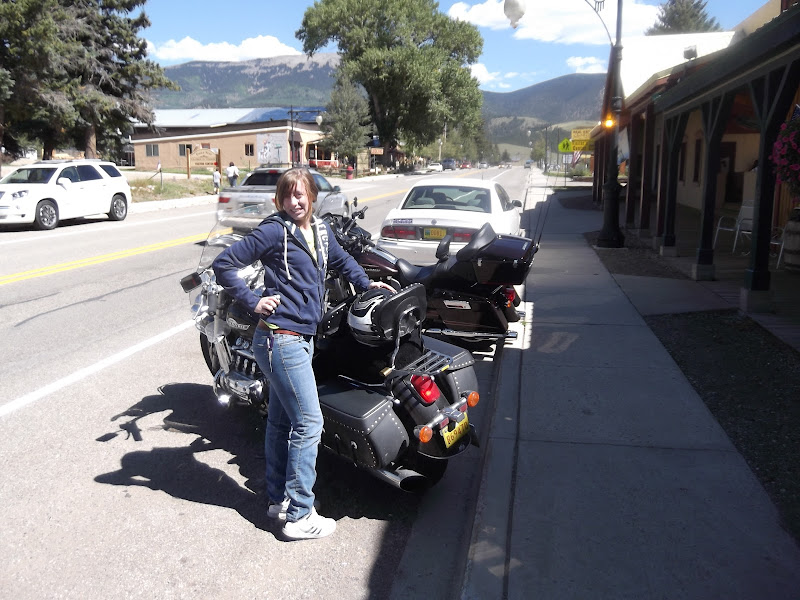 Allie spotted some pie, and couldn’t pass up and ate a piece. 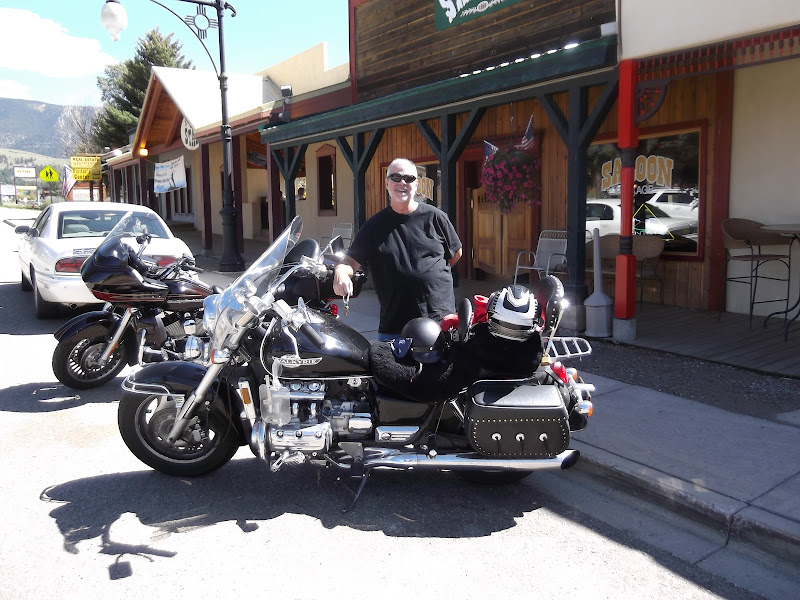 At Eagle Nest we headed north on 38 to Red River. Red River looked like it was having some type of event. My only regret on this ride was that we didn’t stop and watched the quick draw contest. 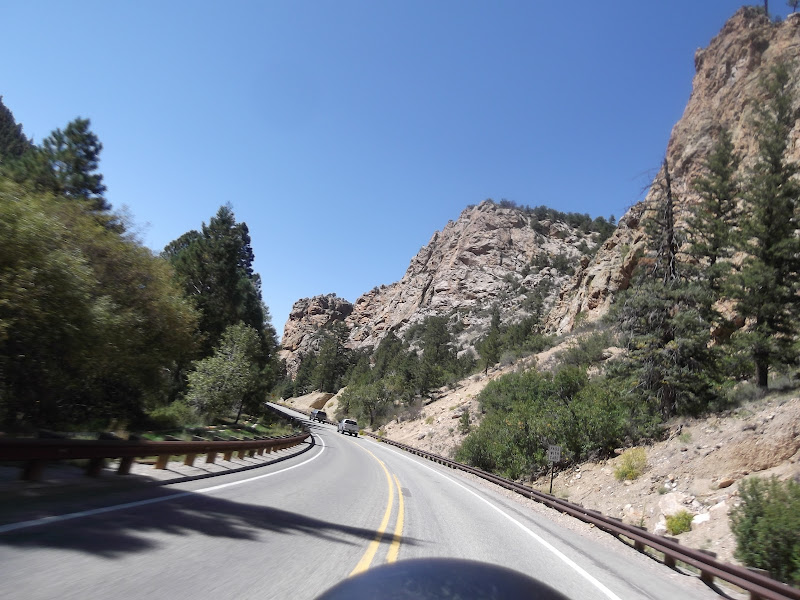 At Questa we turned left onto 522 for the ride back into Taos. 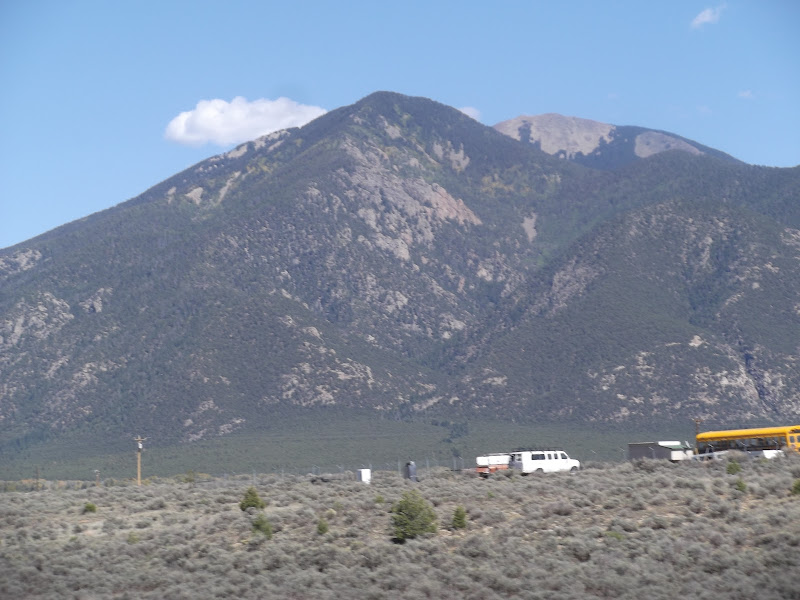 We rode through Taos, making a quick gas stop at the last station on 68 as you leave town. The low road as they call it, is one of my favorite rides. This road takes you down a steep winding canyon with the Rio Grade running next to you for miles. Early morning and late afternoon are the best times to make this ride. It’s during these times that the sun hits the river just right, making the river sparkle and shine. Today we got one of those shows. 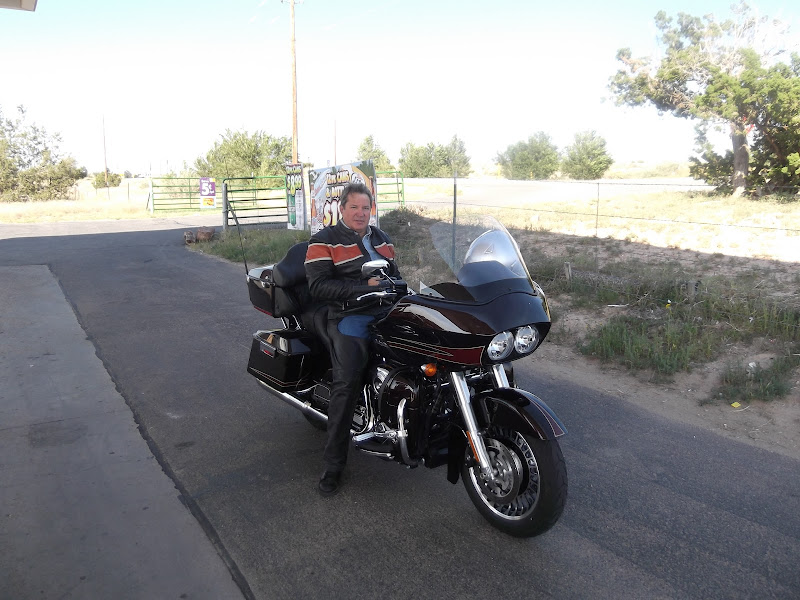 When we got back to 285 I was starting to feel the heat for the first time all day. We used 599 again, but turned right on Airport Road riding to La Cienega. Using State Road 45 to cross over to 14 for our last stop before home.
Thanks for the company Rick, it was a marvelous ride. While the distance was only 365, it was all two lane through the mountains making us spend at least 8 hours on the bikes. As we talked about, we saw—mountains, deserts, rolling hills and plains all in one ride. I’m truly blessed to have the roads of New Mexico to ride.
Category: 301-400, Loop Ride, New Mexico /