As my wife and I were driving to the store she was complaining about the heat. Right in front of us stood the Sandia Crest covered with clouds. I started telling my wife about how cool it would be on top of those mountains. Several minutes later, she asked how long would it take to go up there and I told her we could be there and back in less than two hours. Next came the question I always like hearing, “Can we take the bike?” 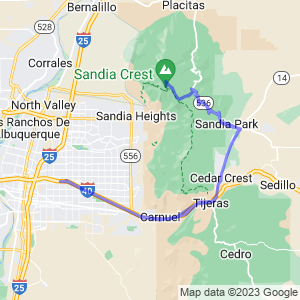 When we got home, I told her to pack a sweatshirt and rain-gear. We took I-40 to the Camuel exit and drove on 333 past Tijeras to the 14. Once we got on the 14 it started to cool down. I could see that it had rained but the road was dry. As we turned left on to 536 we started to climb the mountain. It was cloudy and overcast, the roads were wet, but we didn’t get rained on.
There is almost always lots of traffic on this road and today was no exception. Most of the cars let us past as we made our way to the top, making for a nice ride up.

It was cool on top of the Crest, so cool in fact that I gave some thought to putting on my jacket.

Because there were dark thunder clouds all about we didn’t walk to top and look at the city. We just stopped as long as it took to snap a couple of pictures and then started home.

We ended up following a couple of slow cars most of the way down, but it was still a very enjoyable ride. We stopped at the Shell station when we got back to the 14 and filled up.

In Cedar Crest we saw an art festival so we stopped and walked around. Going home we used I-40 and made quick time back to the city. We were gone about a hour and 45 minutes; it was a great way to break up the day.
Category: 0-100, Loop Ride, New Mexico /