My daughter and I had so much fun last week at the fair in Los Alamos that this week we thought we would ride down to the Otero County Fair in Alamogordo. Because we were afraid of the heat on some of these roads we got an early start.
Show on Google Maps 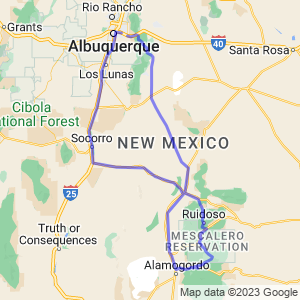 We made good time on Interstate 25, arriving in Socorro in about an hour. We stopped at the McDonalds for a quick snack and filled up the tank on our way out of town.

Seven miles south of Socorro the route exited onto 380.

This part of the drive is 60 miles of hot empty road, it’s no surprise they picked this area for the White Sands Missile Range and the test of the first atomic bomb.

Just before you get to Carrizozo you pass through “The Valley of the Fires”; it’s a lava flow several miles across.

We filled up in Carrizozo and turned right onto 54. For the first 18 miles the road was under construction and the speed limit was 40 MPH or lower. We were still able to make it to the fair by 11:00. By the time we got to Alamogordo the heat started to hit us.
We paid our $2 and got into the Otero County Fair. Walked around the exhibits first because they were in an air conditioned building!

The chilled building helped us cool off from the ride. It was like the hobby building at the State Fair, but with fewer entries.

We found the big crowd in the livestock area. They were getting ready to judge the sheep and the stands were full. This fair was primarily about and for the appraisal of livestock.

Each of the food and game booths were run by a local charity or organization. That’s the way the State Fair used to be when I was a kid and I miss it. After seeing everything, we decided to head home by way of Ruidoso and eat lunch there.

Our return trip took us back up 54 to the edge of town and turned right onto 82. There is one place on this road that really stands out in my mind. You are climbing into these desert hills and you pass through a tunnel and pow–it’s green! It’s like the tunnel takes you to another place. The air cooled immediately. There were rain clouds hanging over the mountains and we decided to head into them. We knew we were going to get wet, but, as my daughter said, “better rain, than the desert sun”.

Just past Cloudcroft we turned right onto 244. Maybe it was the rain, but I’ve never seen this area so green.  The rain came off and on the rest of the day. My daughter took a few more pictures before she had to put the camera away. 244 is a two lane with no shoulders, so we got a little wet before we could stop to gear up.

We turned right onto 70 (it’s 4 lanes) for the last few miles into Ruidoso and followed 48 through the city; stopped for gas and had some BBQ ribs for lunch at Circle J Barbecue. It was the smell of the smoking meat that got me to stop. We had the camera packed up and I forgot to take pictures.
We followed 48 for about 8 miles, then turned right onto 37, then ran 37 back to 380 and Carrizozo around 30 miles from Ruidoso going this way. This time we went north on 54 and this stretch was a little windy, so windy that the gusts were blowing my bike to the left–not an easy thing with my heavy bike! After about 20 miles you will see 55 to your left. I was glad to turn, it took my crosswind and transformed it into tail wind.
The grass was growing tall right up to the road and the birds were getting flushed by my bike. I was sure I would get a bird, but only a couple of brushes with no solid hits. It really started coming down on us over this section of road; it was a good downpour. I have to admit that I used to avoid riding in the rain, but I made a point to purchase good equipment for long rides and now it doesn’t bother me. As a matter fact, on this ride, I think it was a blessing. Hot summer days in this part of New Mexico can cook you with no shade to be had.
We stopped for gas in Mountainair and continued on 54 to 337. The turn is about 25 miles north and the sign says Chilili.

This route takes you through several “New Mexico” villages, each with a church and a few building (all various ages and conditions). At this time in past years the road was lined with sunflowers and the outlying fields filled with wild flowers. But this year we didn’t see any.
We made it home before 5:30 and I got my daughter to her sleepover and my wife to dinner. It was a great day!!!
Category: 401-500, Loop Ride, New Mexico /