Ride to the Pie Festival in Pie Town 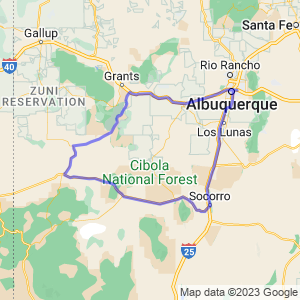 There was one small problem, my Daughter’s basketball team had an activity she had to attend in the afternoon. My answer was to leave her at home and take my wife, but she really wanted to go. So we planned to leave early, not spend much time at the festival and be back in Albuquerque by 1:30.

We left the house just after 7:00 and started west on I 40. After only 70 miles, I stopped and filled up at the Shell station at the NM 117 exit. The next gas is in Quemado about 80 south. While it’s possible I could make Quemado on one tank, any head wind crossing the plains could cause me to run out of gas, that would ruin our ride.

We made a quick stop at La Ventana Arch, it’s about 20 miles from the Interstate. This is the second largest natural arch in New Mexico. The weather was cool, almost cold, with the sun never breaking out from the clouds. It was a perfect day for riding and we were very lucky, riding wet roads, but never getting rained on.

We got to the Pie Festival around 10:00, the festival was just getting started, so didn’t have any problem finding a parking spot.

We walked through the booths setup in the park and over to the fire station.

We bought some cookies from a bake sale, but stayed focused on the real reason we were here—Pie!!

We had to wait for our pie while a couple of photographer took pictures of the pie for a film they were shooting.

After we enjoyed our pie, we got back on the bike and headed east on US 60.

We made a quick stop for pictures at the Very Large Array before riding into Socorro for one last gas stop.

We stayed on I 25 all the way into Albuquerque and were back at the house before 1:30. While I would have liked to spend more time at the Pie Festival, it was still a great ride. Going to the festival was just an excuse to ride and this loop covers some incredible landscapes. Riding a motorcycle on an empty highway with nothing but you and the road, gives me a tremendous high. This route gave me plenty of empty highway to experience that feeling.