This is the second day of a four day trip.

To see the first day, third day or forth day click the link. 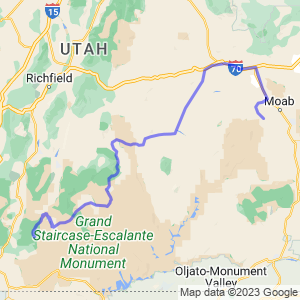 We woke just as the sun started rising, a stove was lit and water heated for coffee. Everyone quietly and quickly packed their bikes and we started our second day of riding. 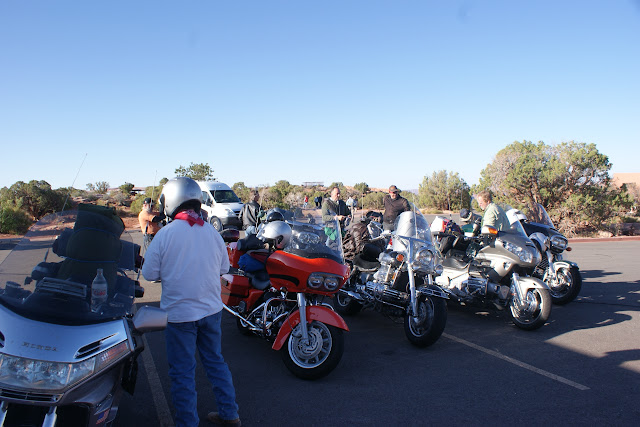 Our first stop was Dead Horse Point to take in the scenery lit by the early morning light. Exiting a bus as we arrived was a large group of Italian tourists. 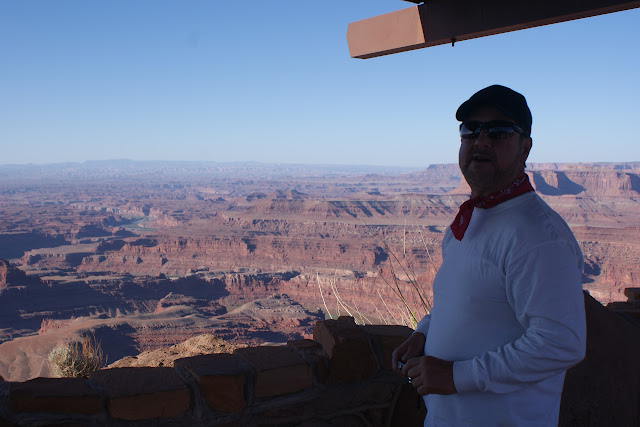 The view stunned me, it was as impressive as the Grand Canyon and I’d never heard of Dead Horse Point before. Yet here was a tour bus of Italians, demonstrating to me that I need to learn more about my own country. 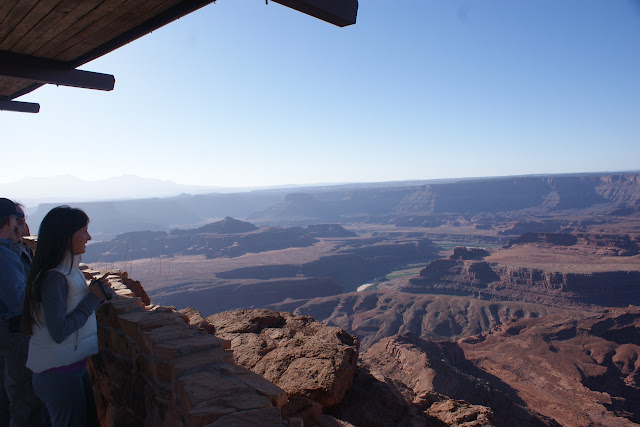 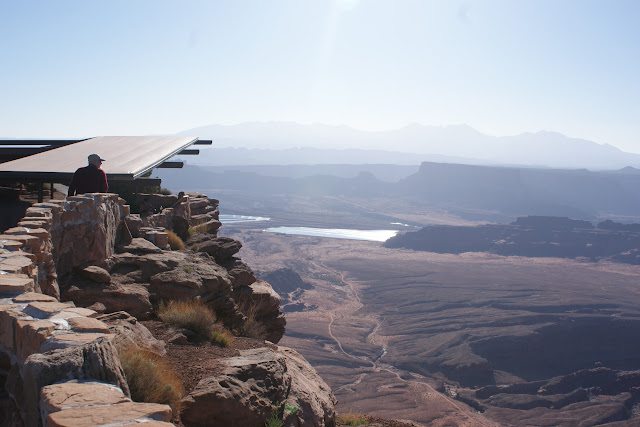 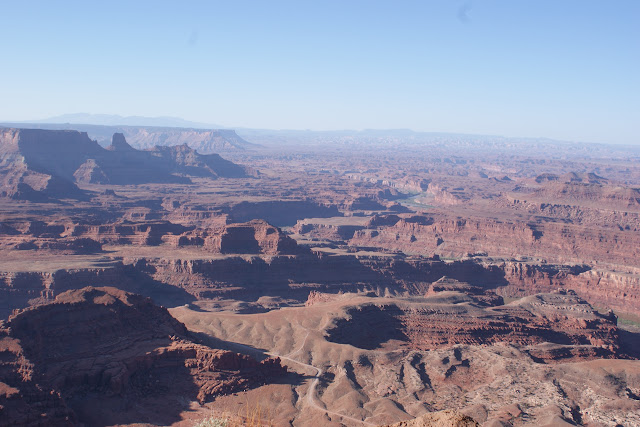 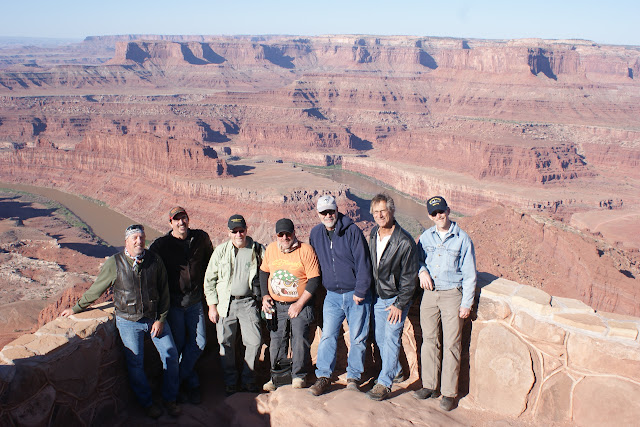 As we were leaving several of the tourist started taking pictures of us. “Americans on their motorcycles”. 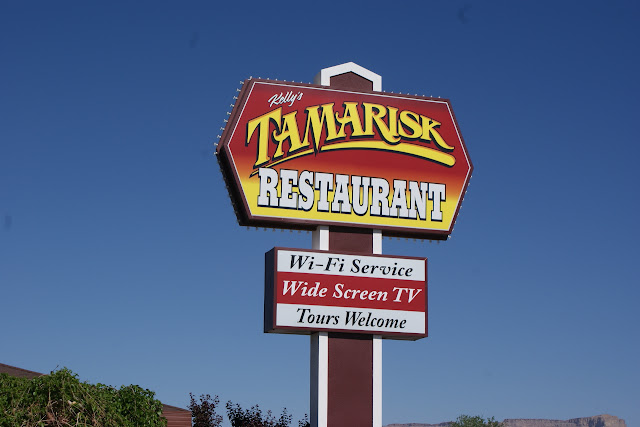 Our next stop was for breakfast in Green River at the Tamarisk Restaurant. 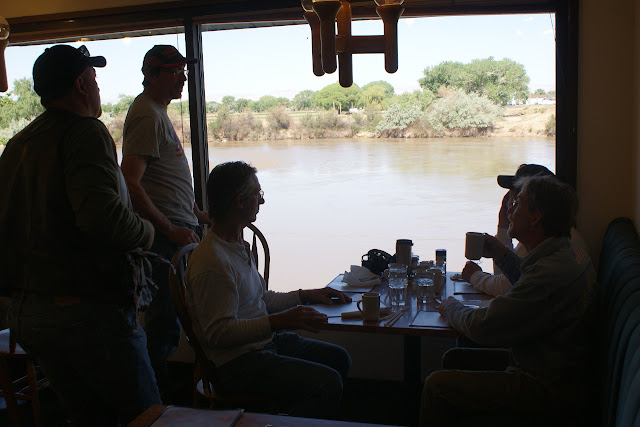 The restaurant had large open windows that overlooked the river, providing a very pleasant and peaceful view. 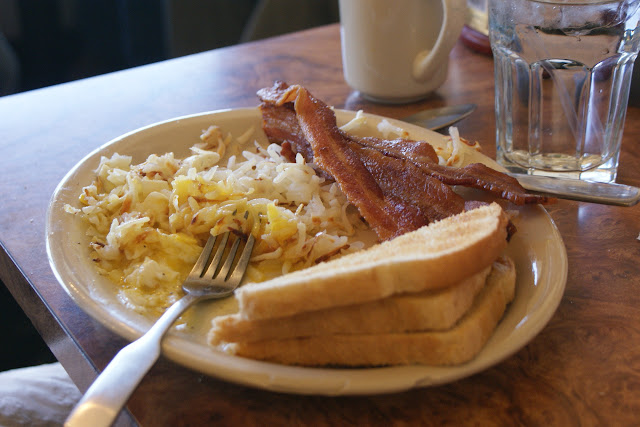 The service and food were above average, but it was the view that was the real star. 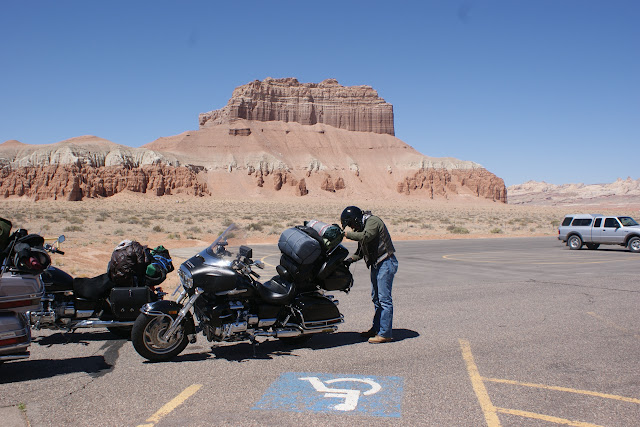 Our next stop was Goblin Valley, it was a few miles west of the highway. Goblin Valley is different and I’d never seen any other place like it. 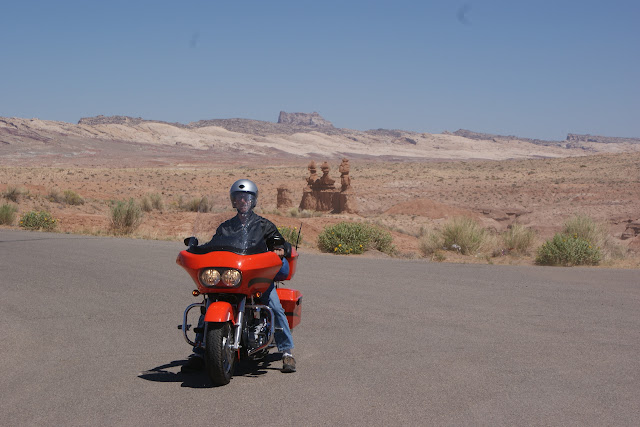 Thousands of toad stool like rock formations cover this valley or as Fred would say turtle heads. 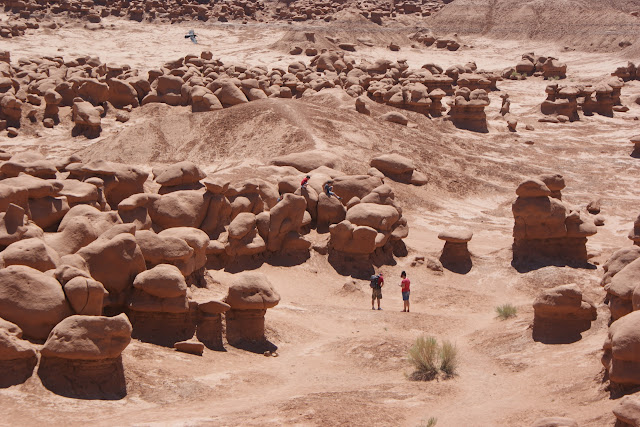 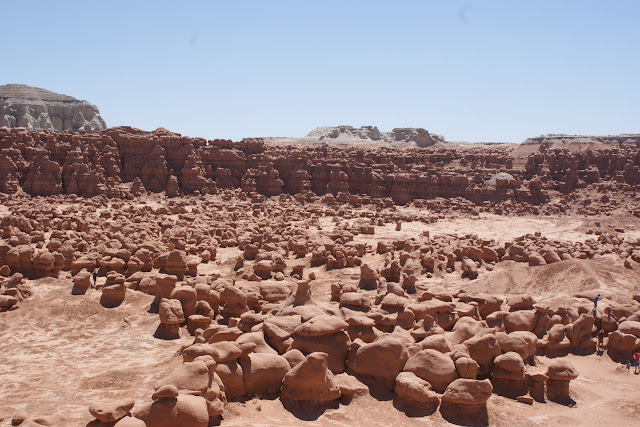 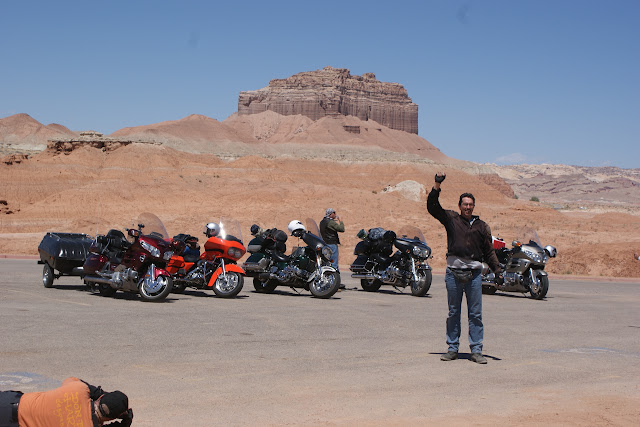 UT21 from Hanksville to Torrey weaved in and out of several canyons, providing excellent views to go along with challenging riding. UT21 is fine motorcycle road, if not for the gusting crosswinds this would have been a perfect ride. 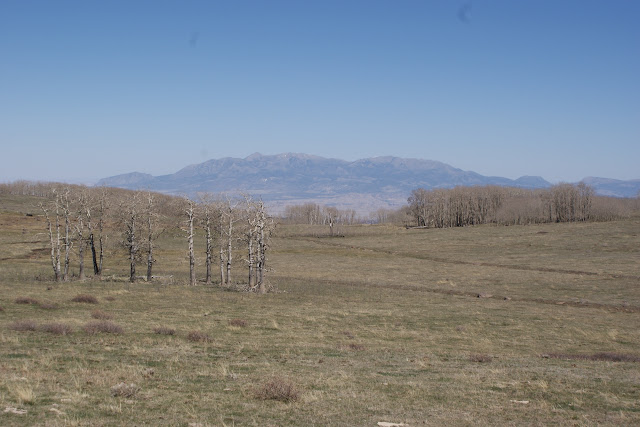 I split with the group at Torry and contined on my own down UT12 (Highway 12 — A Journey Through Time Scenic Byway) to Bryce Cannyon. UT12 is 122 miles long and started off by going over Boulder Mountain. 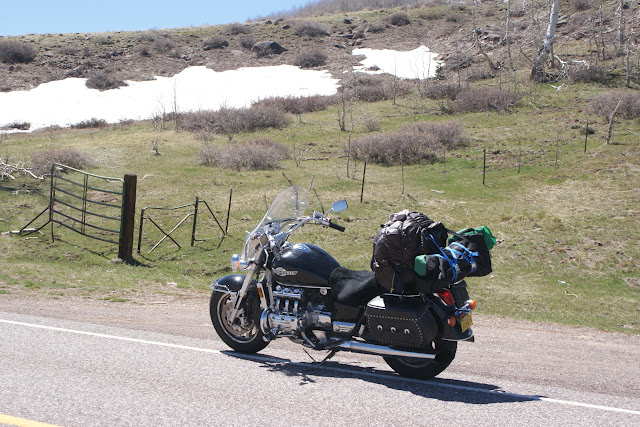 The highway then moved through various parts of Grand Staircase and Escalante National Monument. 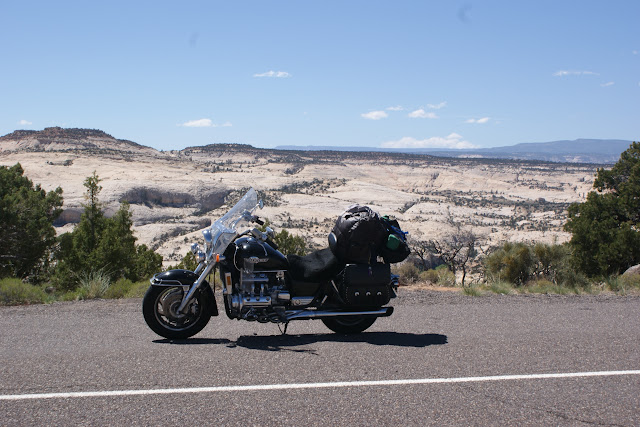 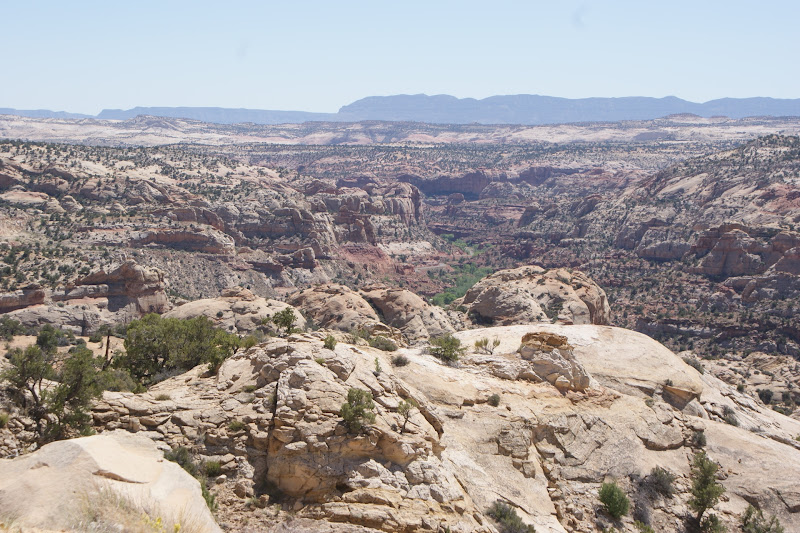 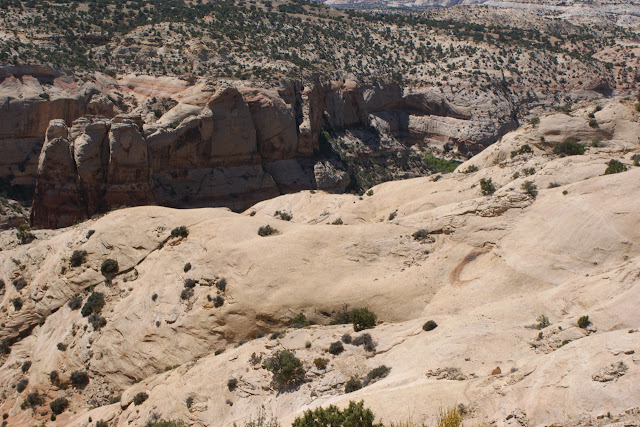 At one point there were shear declines on both sides of the road as it split two canyons. Then the road descended into the canyon where the Calf Creek runs. 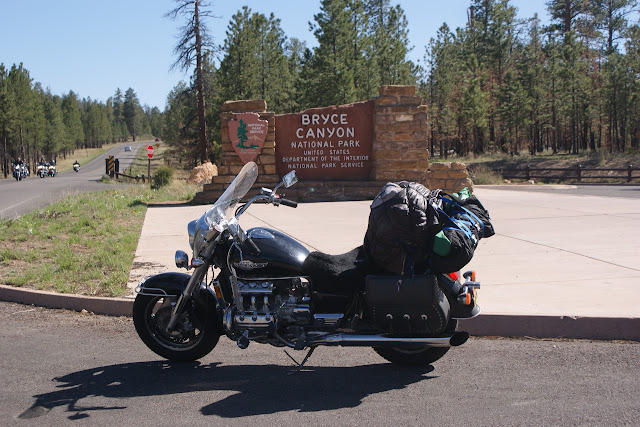 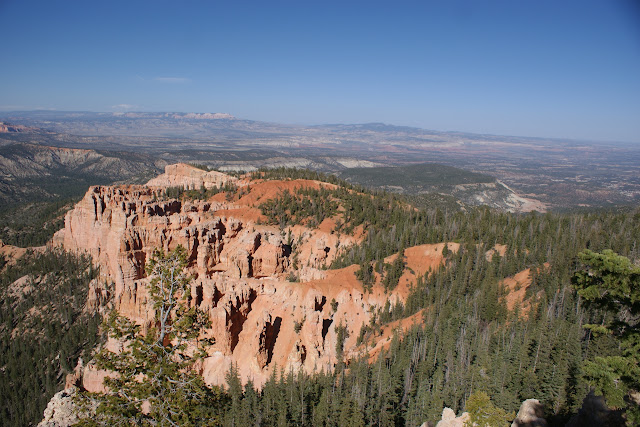 Bryce was filled with tourist from all over the world. In fact I didn’t hear anybody speaking English as I made hiked to the different view points. 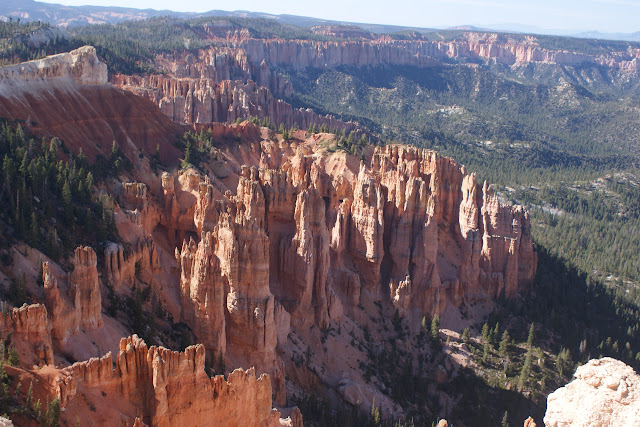 After driving to the end of the canyon, I then returned, stopping at each view point all the way back. 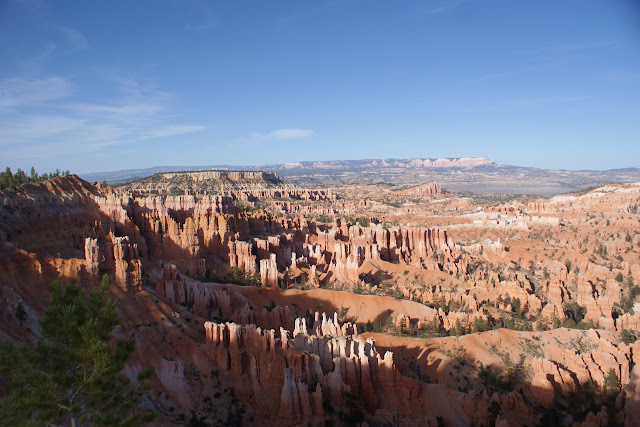 I was staying at the KOA in Cannonville, so I had to backtrack a few miles after visiting Bryce Cannon. The owner of the KOA took some time after he closed to discuss different roads in the area with me. It was dark before I had my camp completely setup. 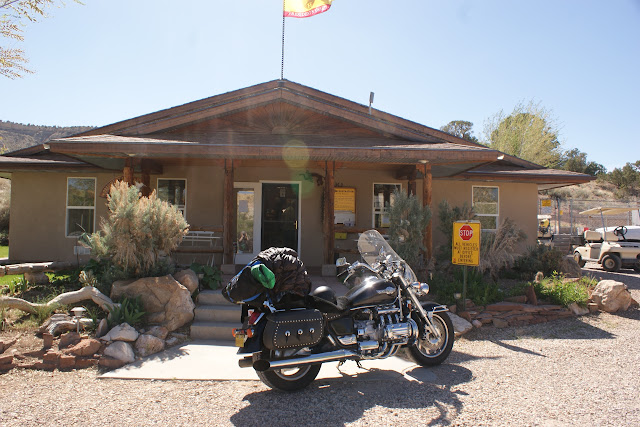 After getting everything ready for the night I took a shower. Standing is that warm water really  brought me back to life after a long day.