Ride from Raton to Albuquerque 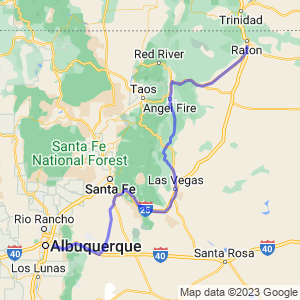 We got up just as the sun was rising, it was still cold as packed the bike. After a quick cheap breakfast at McDonalds we were on the road before 7:30.

We started south on I 25 for about 3 miles to US 64. As we started west on US 64 there were hundreds of antelope, they were all along the road. It caused us to have several close calls as the spooked antelope raced across the road just in front of us. Unlike the deer that leap the fences along the road, the antelope climb under them. So when the motorcycle approaches, they start looking for an open area, making break away from the fence, into the road.

Two bull elks, complete with huge racks and beards were the highlight of this section of highway, they were coming down to cross the road. We passed within 15 feet of these majestic animals, making it easy to note their massive size.

We stopped in Cimarron and filled up the bike, before going a few miles down NM 21 to Philmont Scout Ranch. The ranch was closed, but I wanted to show tent city to my daughter. In my youth, as a Boy Scout I got to experience Philmont several times. Philmont is a magical place that lets you disappear into back-country on a backpacking adventure that lasts for a couple of weeks.

After a quick look around Philmont we headed back to US 64 and started weaving our way west through Cimarron Canyon.

Leaving the canyon we came upon Eagle Nest Lake, providing a view that always worth stopping to see.

After passing Eagle Nest we turned left onto NM 434 and followed it into Mora. This road is a little ruff till you get to Coyote Creek State Park, it’s narrow and has no center lines and any cars you pass will be crowding your side of the road.

But this road’s well worth the trouble and rewards you with great views, there is even beaver damn right next to the road.

Just before Mora, there is an Alpaca ranch, filling the pastures next to the road with alpacas.

In Mora we took a left, then a quick right onto NM 94. This is one of my favorite little highways and I take every chance I get. It takes you past farmland with a view of the nearby mountains. You go through a couple small villages with a narrow road and very sharp turns.

At NM 518, we take a right and head south to Las Vegas, we catch I 25 and go south to NM 3. We exit at NM 3 and rode to the train tracks, that’s where you’ll find La Risa Cafe. During the winter this cafe closes and I’d been telling my daughter how great their Hangover Stew was. So my daughter gets the Hangover Stew and talks me into having Huevos Rancheros so we both don’t have the same thing. Her logic was that we could both share and try each other food, but somehow I never got a bite of her stew.

After a great lunch, we opted to split some Coconut Cream Pie. This is a type of pie we have shared before and both enjoy, but this piece was best either of us have ever had. The La Risa Cafe is out of the way, but make some time and give it a try it’s worth it.

We headed back north to I 25 and rode to the US 285 exit. We took US 285 south to NM 41 and followed it to Moriarty. There was an accident on I 40 and traffic was being moved to NM 313. That made NM 313 a parking lot and we slowly made our way back into Albuquerque.