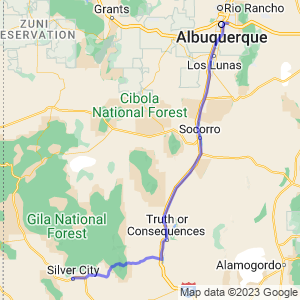 This weekend I’m taking my wife on an overnight trip to Silver City and we will be staying in a tent at the KOA Silver City. Silver City is one of my wife’s favorite quick trips and we have visited there many times over the years. However, this will be our first time motorcycle camping together and I’m hoping she enjoys it.

We left the house early, stopping to eat breakfast at the K & I Diner before starting our adventure. I ordered a ham steak and eggs for us to split, thinking we would get ham, but instead we got hamburger steak.

We went ahead and embraced the mistake, hamburger and eggs is not something I’d ever think of eating for breakfast. The meat had a good flavor and we both really enjoyed the change from our normal selection.

After breakfast we started south on I 25, anytime I’m riding on the Interstate it feels like I’m just riding to get somewhere. This ride was no exception, unfortunately cruising the Interstate doesn’t give me the same riding enjoyment as a two lane highway.

Fortunately, we made good time running the Interstate, stopping for gas in Soccoro and Truth or Consequences (Williamsburg).

After filled up in Williamsburg we made our way to NM 187 and took it to NM 152. We then took NM 152 west to Sliver City. If you like roads that twist and turn, then NM 152 is the road for you. NM 152 runs straight for the first 15 miles, then just before Hillsboro it starts 50 miles of every kind of twisty you could hope to ride.

Google maps gives this 65 miles of highway a 2 hour ride time for a reason.

If you haven’t ridden NM 152 I advise you to give it a try, it’s one of the best motorcycle roads in New Mexico.

We stopped at Santa Rita and looked at the gigantic man made hole (open pit copper mine). The original Santa Rita once stood in the middle of this big hole, it was moved so they could mine the ore underneath it. At the roadside exhibit there was an old picture of the town before they started the mine, the change in the landscape was amazing.

Before riding into Sliver City we checked into the KOA. After getting the tent setup and storing our gear we rode into town.

We parked the bike in the downtown area and proceed to do what my wife likes most of all. We wandered up and down each street looking at and in the stores.

The downtown in Sliver City has several large antique stores and we spent most of our time looking through them.

At the south end of the downtown is the Silver City museum, it’s located in an old and very interesting house. Twenty five yeas ago when we first visited the museum it was just the house, but over the years they have added onto it and now it takes up most of the block.

After leaving the downtown we went for an early dinner, very late lunch at the Wrangler Bar and Grill. Several of the tables had small TV’s and it was busy, it was the town’s sports bar. We ordered their Sampler Platter and a Rubin. The food was fair, it seems the bar not the grill was the reason the place was busy.

Before riding back to the camp, we stopped and picked up a bottle of wine. When we got back to our camp it was almost time for the sun to set.

The people that run this KOA were very nice and the place was very clean. There were several large families getting together for the Easter weekend and their dinners smelled much better than the one we had just eaten.

We took a short hike up a trial that started right behind our tent and came back before it got dark.

Then we sat on the picnic table drinking the wine and talking as the sun faded behind the hills. We had no other distractions, there was just the two of us. This was the perfect way to end the day, laughing and talking into the night.