Ride from Alamogordo to Carlsbad

Ride was 244 miles with about 6 hours of riding time.

This was the second day of a three day trip.

The third day can be found here. 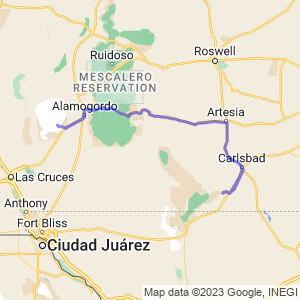 While sleeping in the tent I had one of those nights where I was too cold outside the sleeping bag and too hot in it. Then a couple of times trains rumbled past, so loud that the ground shook at their passing. With all that going on, I still woke up just before sunrise, feeling refreshed and ready to start the day.

With first light we broke camp and packed the bike. We need to be at Carlsbad Caverns before 2:00 if we wanted to walk into the cavern.

We made a quick stop at McDonald’s for a cheap breakfast and then rode 13 miles west on US 70 to White Sands.

Because we got there before the ranger was in his booth, we got in for free. We rode about 7 miles into the dunes then stopped and walked up a boardwalk like trail.

There were models doing a photo shoot using the dunes as a backdrop. Watching the girls walk across the sand in heels was priceless. While we were using model like poses, the real model is the one in the dress.

We left White Sands and rode back into Alamogordo, filling up before starting into the mountains on US 82. It’s 108 miles to Artesia and the next gas station.

There was still some snow and it was cool riding, a nice change from the heat of yesterday.

We filled up in Artesia and started south on US 285 to Carlsbad. We stopped at our campsite and checked in. After dropping off our gear at the campsite we rode the 17 miles south to the Caverns.

After you turn off US 180 the next 7 miles are filled with twists and turns. There had been a fire and the small amount of vegetation in the area was black. At the Caverns they had motorcycle parking right up front from making it very convenient.

We spent the next several hours hiking into and around Carlsbad Caverns. We took sweatshirts because it’s cooler in the cavern, but ended up carrying them. It was wonderful going on a Friday, while there were lots of people it was nowhere close to the crowd I had to fight last time I was here.

After riding the elevator back up, we were ready for some dry heat on our ride back to Carlsbad.

Once back in Carlsbad we went to the Carlsbad Museum and Art Center and walked around. It was worth the visit, they a room full of arrow heads and another of old pottery. It was much more of a museum than I expected.

Because we didn’t eat lunch and were going to only have two meals for the day we decided to eat at a buffet. We asked the people working at the museum for the best restaurant with a buffet. They recommended the Dragon China Buffet at the edge of town.

It was a average buffet, the food was good, but not great. Because we were there too early for dinner and too late for lunch the service was outstanding. They never left a dirty plate or let our glasses get less than half full.

After dinner we went back and setup our camp and hung out in the common area of the campsite. We played some ping pong and relaxed from the long day. This ride was a first-class adventure, we saw models at white sands, road though the mountains with snow and deserts already at 95 degrees. Then we hiked several miles into the earth to see one of natures greatest wonders.

It was a great way to spend the day with my daughter.