Ride to Truth or Consequences

Ride to Truth or Consequences and lunch at BellLuca with “Let’s Ride New Mexico” and back on NM 1 with a stop at Bosque del Apache—North Interstate 40 to T or C. Back on I 40 then on to NM 1, and in Socorro back onto I 40 to Albuquerque. 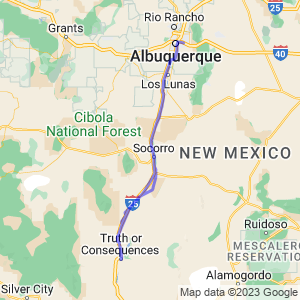 The weather site was telling me that we were going to have temperatures in low 50’s on Saturday. My daughter didn’t have any games and my schedule was open, so I started thinking about where I wanted to ride.

“Let’s Ride New Mexico” had a ride posted by Vicki for lunch in Truth or Consequences at BellaLuca. I decided to join the group for the ride down and lunch, then to come back alone using NM 1. NM 1 is a highway I’d rode, but never all the way from end to end.

The group met at Dion’s just off Gibson and we started the ride south at 9:15. We stopped in Socorro for gas, it was a quick fill up, then back on the Interstate. The group made good time riding right around the Interstate speed limit. We exited into Truth or Consequences, gassed up and started looking for BellaLuca.

BellaLuce is a Italian restaurant and on this day it was our group and two other people making up their lunch rush. They did however, look like they do a large amount of business for dinner.

I had their Fried Calamari, they served it on a bed of greens and it was very good. It was a relaxing lunch, I enjoyed my meal and the company.

After lunch I rode with the group back to I-40 and the 15 miles to the NM 1. After giving them a wave, I exited for my solo part of the day.

New Mexico Highway 1 runs parallel to I 25, it’s the remnants of a road built in the 30’s that ran between Albuquerque and Las Cruces. The road surface was a little ruff in a couple of places, but I was still able to keep Interstate speeds.

The best part of taking this road was no other traffic, it was truly a deserted highway.

This is the area where caravans made deadly water less trips along the Camino Real.  It’s amazing to think how far mankind has come in the last 200 years. Where once there was a passage so dangerous it was called Jornada del Muerto(Journey of Death), now is a highway, one I crossed in less than a hour.

Next stop was the Bosque del Apache, a world-renowned bird and wildlife refuge.

Bosque del Apache, which means “woods of the Apache”, is a refuge for migrating birds. There are duck, cranes and geese filling these shallow ponds and fields along both sides of NM 1.

In some places there were so many birds, that their calls and chirping could be heard over the roar of my motor.

While I’m not bird watcher, seeing thousands of birds covering a field, all calling out and moving about, with groups flying in and out, is a spectacle worth seeing.

This ended up being a fantastic ride, I started the day with some great company. I ended the day alone watching nature in all it’s glory. I’ve ridden this part of the state in the summer and it’s no fun, the heat makes any ride almost unbearable.  However I’m finding out this year that any sunny day over 38 is perfect riding weather.
Category: 301-400 /