Ride to Estancia for Lunch 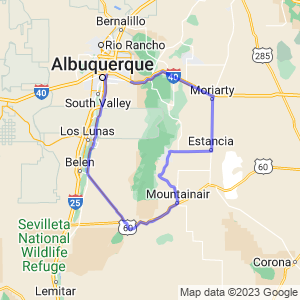 The weather man was predicting nice weather for Saturday the 31st, the last day of 2011.  I couldn’t think of a better way to spend a sunny winter day than riding the highways of New Mexico. So I posted the ride on the AMRC web site and had four riders join me for this outing.

We met at Einstein Bagels on Central, right where NM 333 starts east out of the city. It was a mixed group of riders, three men and two ladies, with all different types of bikes. As soon as we left the city limits snow was lining both sides of the road. When we started south on NM 41, there was snow blanketing the ground as far as you could see in all directions.

Looking out over the snow covered plains turned me into real sightseer, it was an inspiring vista.

In Estancia we stopped at Blue Ribbon Bar, only it’s not a bar any more.

The Blue Ribbon is listed on “New Mexico’s Green Chile Cheeseburger Trail”, so that’s what I ordered. The burger was good but not great and the chile had a bite. The service was friendly and quick, it’s a place I will return too if it fits into my plans. After about an hour of food and fellowship we got back to riding. At NM 337 we broke into two groups, three went north on NM 337 and back to Albuquerque.

That left two of us (Myself and Mike) traveling NM 55 into Mountainair and turning right onto NM 60. Just outside Mountainair as the road was running parallel to the train tracks, we passed a freight train heading the other way. The engineer gave us a wave and a blast from his horn, providing me with one of those, “it great to alive moments” you get while riding.

On the west side of the mountains there was very little snow to be seen. We rode north on NM 47 making a quick stop at Benny’s for what I think are the best taquitos in New Mexico. While we were eating a guy came over and started talking with us about riding. Then he left and came back with a picture of him on his bike. You could tell he loved his Harley and was excited to share the picture with us.

After leaving Benny’s we rode NM 47 to the Interstate and then headed into the city and home. I had a wonderful time, it was a good way to end this 2011 year of riding. Thanks to Kitty, Maryanne, Ed and especially Mike for making this last ride of the year one to remember.
Category: 101-200, Loop Ride, New Mexico /