Ride to the 19th Rio Rancho Toy Run with AMRG 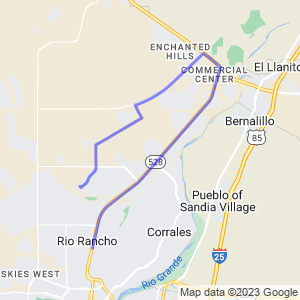 The Rio Rancho Toy Run was something my wife really enjoyed last year when we went and she wanted to go again. We got up early and left the house at 8:00, rode over to Mac’s La Sierra on Central and grabbed some breakfast. There were 8 other bikes in their parking lot, all headed
to the Toy Run.

After breakfast we made our way over to Weck’s in Rio Rancho to meet up with the AMRG. Richard (Grumpy) had posted a ride for the AMRG to ride to the run as a group. He was easy to find in his Santa hat.

AMRG had a turn out of 8 bikes plus a couple of riders that stopped at Weck’s to drop off toys, but couldn’t make the ride.

At 9:45 we made the short ride over to Rio Ranch High School where the Toy Run starts.

At the school we made the long walk over to drop off the toys and can goods.  Then we stood around shooting the breeze till 11:30, when the run started.

For the run the police blocked all the traffic along the route, still there was a lot of stop and go. We were near the front of this long line, thousands of bikes long. Last year there were over 5000 bikes, I don’t know how many rode in the run this year.

At the end of the run there was a band, beer and booths. We wandered around and looked at the booths, saw some deer skin gloves (they were so soft).

We walked down the street and looked at all the bikes on our way out. There were so many different kinds and styles to see.

Saw one custom built bike with a V6, had to wonder how that one rode.

We had a good breakfast, I saw some people I’d hadn’t seen in a while. Made some new friends and got to see thousands of different bikes all for a good cause.
Plus, we were home in time for me to watch the afternoon football games.
It was a nice day!
Category: 0-100, Loop Ride /