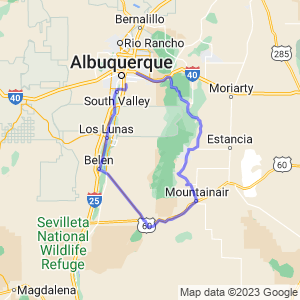 The sunflower Festival didn’t start till 10:00, so we didn’t leave the house till 9:30. We stopped for gas and air at the Tramway/Central Smith’s station and the air pump was broken. This caused us to do a little running around to get some air in the tires. When the bike was ready to roll, we turned it onto 313 and road it to Tijeras. At the light in Tijeras we turned right onto 337.

337 is a fun road with a few twists and turns, nothing too sharp. It’s only problem is traffic, it’s a popular road and our late start didn’t help. Also they are repaving the road and there was road construction to slow us down even more. After we got past all the picnic areas, it thinned out and we were back to riding. When we hit the plains they had a touch of green, you could see it had been raining this last week.

337 ends at 55, where you take a right, there is an easy area to pullover here, if you need to stretch.

55 takes you past several small New Mexican villages, these little places are throw backs to another time.

Just past Manzano you will see the turn off for Quarai Ruins. These ruins are what’s left of southwestern castle. It was a place the old Spanish settlers used to defend them self from the Apaches. It’s a fort/church and the walls are thick and tall. It’s only a mile off the main road and it’s well worth stopping in to see.

Then it’s on to the city on the plains called, for some reason, Mountainair. We turned right onto 60, Mountainair’s main street.

The Festival seemed to be bringing in some people. There were some food booths, crafts contest and a book sale for their library.

We stayed on highway 60 south out of town. As this road rounds the mountains the change from one side of the mountains to the other is drastic. You drop down into a flat desert plain, where one side had some green, the other side has none. As you come to this flat area, you will see 47 to the right. Few miles down 47 you will cross some train tracks, then you have at least 10 miles of empty flat road to open up on.

We turned right at 309 and rode to downtown Belen to eat lunch at Harley’s Fat Boy’s. They make these green chili strips that I really enjoy. They batter and fry strips of green chili, the strips looks like flat onion rings but they taste great.  Leaving Harley’s we turned right onto main street/highway 314 and road it back to Albuquerque.

After you pass through Isleta Village and 314 becomes Isleta Blvd, it hard to believe you are in Albuquerque. The city areas along the Rio Grande valley are nothing like the rest of the city. These parts of the city make for a nice rural ride, while still in the city.

We turned right on Rio Bravo riding past I-40 to University. We rode north on Universiy to Sunport Road, past the airport (not sure why I did it, at the time it seem like a good idea) and home.